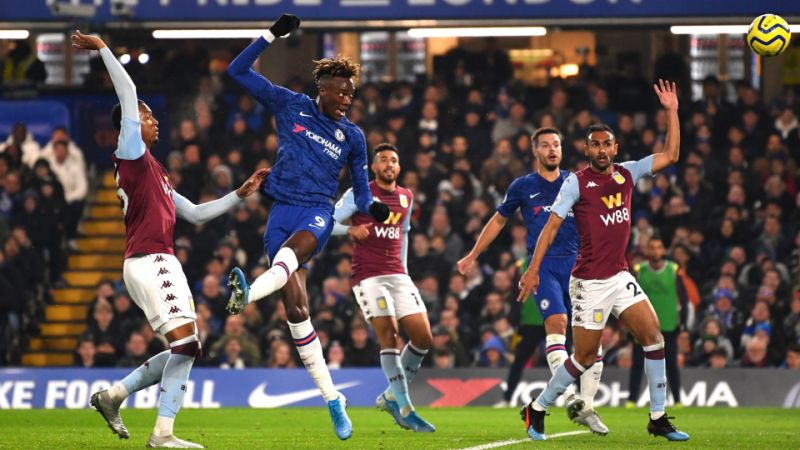 Tammy Abraham was prolific on loan at Aston Villa last season but helped to sink his former club on Wednesday with another goal for Chelsea.

Abraham, who scored 26 times on loan to help Villa to promotion last season, returned from a hip injury on Wednesday and claimed his 11th Premier League goal of a brilliant breakthrough campaign to put Chelsea ahead after 24 minutes.

Trezeguet rounded off a fine move in somewhat comedic fashion to pull Villa level before the break, but a wonderful Mason Mount volley – from Abraham’s chested lay-off – restored the home side’s lead early in the second half.

With Willian superb, Chelsea were unable to claim the additional goals they merited as a host of further chances went begging, but boss Frank Lampard could still be happy with a much-needed three points in the wake of successive losses to Manchester City and West Ham, his only real concern being the sight of Abraham limping off in the closing minutes.

Villa, sitting perilously close to the relegation zone, were far too passive early on and could have few complaints when they fell behind. Abraham, absent for his side’s below-par display against West Ham, was left unmarked to head home a Reece James cross, having been played onside by Ahmed El Mohamady.

Chelsea struggled to build on their breakthrough, though, and they were punished shortly before the interval. A flowing Villa move ended with El Mohamady delivering a teasing ball, which Trezeguet fortuitously bundled into the net after initially heading down on to his own legs.

It took less than three minutes of the second half for Chelsea to retake the lead, Mount showing superb technique with a volley after Willian’s cross had been chested down by Abraham.

The hosts could have scored several more as Willian continued to run Villa ragged and the Brazilian was only denied a goal of his own when Tom Heaton – Villa’s best player – made a spectacular save to tip a free-kick onto his left-hand post.

What does it mean? Chelsea back on track as Terry returns

Chelsea needed a victory after underperforming badly against West Ham and they got one despite spurning a number of chances. Before the game, there was an understandably rousing reception for club legend Terry, who was back at his beloved Bridge as the assistant manager to Dean Smith at Villa.

Willian was a constant threat down the Chelsea right, where he was well supported by James. The pair repeatedly combined to cause Villa left-back Matt Targett all kinds of problems and it was no surprise that both home goals came from right-wing crosses.

This was always going to be a tough test for Villa, but they arguably showed their opponents too much respect as they sat painfully deep at times, inviting cross after cross.