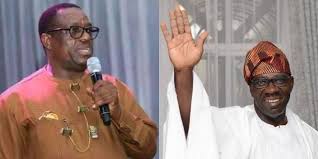 The Acting National Chairman of the All Progressives Congress (APC), Victor Giadom has cancelled the screening for the Edo State governorship primary.

Mr. Giadom explained that he has taken over based on a previous court order empowering him to do so.

According to him, he has the backing of the members of the party’s National Working Committee (NWC).

Below is the court order

In a statement signed by party spokesman Mallam Lanre Issa-Onilu, the APC said its National Working Committee (NWC) had been guided by the party’s legal department in line with the provisions of its constitution.

This development comes after the Court of Appeal sitting in Abuja also on Tuesday affirmed the suspension of Comrade Adams Oshiomole as a member and National Chairman of the All Progressives Congress (APC).

Ruling on the interlocutory appeal filed by Comrade Oshiomhole, the appellate court upheld the decision of the Federal Capital Territory High Court delivered by Justice Danlami Senchi which in March ordered the suspension of Oshiomhole as well as restraining him from parading himself as the National Chairman of the party.

In a unanimous judgement in the first appeal delivered by Justice Eunice Onyemanam, the court held that the FCT High Court had territorial jurisdiction to have entertained the suit as it did.

The court also withdrew his rights and privileges as National Chairman of the party including his security details.