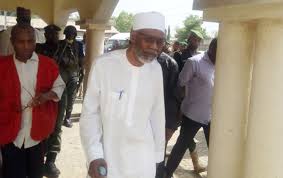 The High Court of the Federal Capital Territory in Gwagwalada, Abuja, on Thursday ordered the remand of a former Attorney-General of the Federation and Minister of Justice, Mr. Mohammed Adoke (SAN), and two of his co-defendants in the custody of the Economic and Financial Crimes Commission over their alleged involvement in the Malabu Oil scam.
The judge, Justice Idris Kutigi, also fixed Monday for the hearing of their bail applications.

Justice Kutigi, who had initially indicated intention to order the remand of the defendants in prison, changed his mind and asked EFCC to take their custody after the commission’s prosecuting counsel, Bala Sanga, succumbed to the pleas by the defence lawyers that the commision should hold them pending the hearing of their bail applications.

Meanwhile, Adoke was arrested by the EFCC on his return to Nigeria from a four-year exile on December 19, 2019.
He has since been in the detention of the EFCC and was produced in court from their on Thursday.
The seven defendants, four of whom are corporate organisations, pleaded not guilty to the 42 counts instituted against them by the EFCC.

The charges involve alleged gratification of N300m, forgery of documents relating to Malabu Oil and Gas Limited, abetting, among others.

Apart from Adoke, other defendants who pleaded not guilty to the charges read to them before the court included Aliyu Abubakar, who was accused of offering N300m gratification to the ex-AGF in relation to the Malabu Oil deal, a former company secretary and legal adviser of Malabu Oil and Gals Limited, Rasky Gbinigie.

The EFCC accused Adoke, as AGF, of playing a pivotal role and receiving bribe to facilitate a fraudulent deal between Malabu and Shell with Agip over the oil block.

After the 42 counts were read to the defendants and they pleaded not guilty to the charges, on Thursday, the Economic and Financial Crimes Commission’s prosecuting counsel, Mr. Bala Sanga, urged the court to remand them in prison.