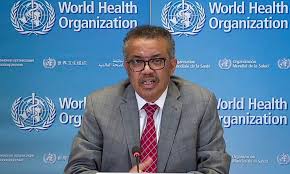 The World Health Organisation (WHO) chief, Tedros Ghebreyesus has dismissed as “racist” a suggestion by some scientists that the coronavirus vaccine be tested in Africa.

Ghebreyesus at a press briefing on Monday said Africa is not a testing ground for any vaccine and described such suggestions as a hangover from the “colonial mentality.”

“On the vaccines issue, there was a comment from some couple of scientists who said the testing ground for the new vaccine should be Africa.

To be honest, I was so appalled. When we need solidarity, these kinds of racist remarks will not help.

“Africa cannot and will not be a testing ground for any vaccine. We will follow all the rules to test any vaccine or therapeutics all over the world using exactly the same rule, whether it is in Europe, Africa or wherever, we will use the same protocol,”

Ghebreyesus said in the video from the press briefing which was shared on his official Twitter handle.

“When we needed solidarity these kind of racist remarks will not help. It goes against the solidarity. Africa will not be a testing ground for any vaccine.” – @DrTedros in response to two French doctors suggesting a potential vaccine be trialed in Africa.

Comments by two French doctors sparked a comeback after a Television debate in which they suggested trials of vaccine in Africa to see if a tuberculosis vaccine would prove effective against coronavirus.

Jean-Paul Mira, head of intensive care at Cochin hospital in Paris, then said: “If I can be provocative, shouldn’t we be doing this study in Africa, where there are no masks, no treatments, no resuscitation?”

Camille Locht then replied: “You are right. We are currently thinking similarly about a study in Africa regarding the BCG vaccine. There is a proposal that has gone out — or will. We will seriously consider it.”

Their statement sparked backlash on social media, with celebrities including top footballers Didier Drogba and Samuel Eto’o describing it as unbelievably shocking and provocative.

It is totally inconceivable we keep on cautioning this.
Africa isn’t a testing lab.
I would like to vividly denounce those demeaning, false and most of all deeply racists words.

Helps us save Africa with the current ongoing Covid 19 and flatten the curve.