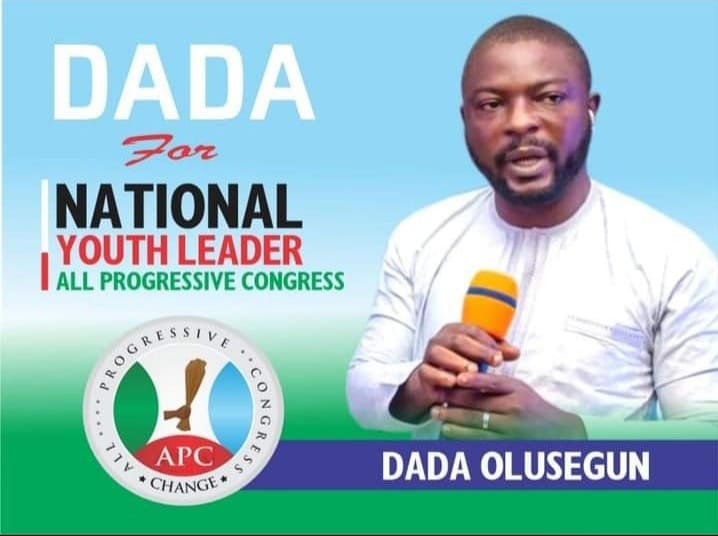 The emergence of Dada Olusegun as the most popular, ever capacitated National Youth Leadership’s aspirant of the APC cannot be overemphasized. His support from the North is overwhelming and the nature of his outreach to all zones further shows that his mandate and aspirations are to carry every progressives youth along.

This is without a doubt that his vision for the general well being of all youths across the Progressive States and Nigeria at large cannot be overemphasized but to state clearly that his mandate, aspiration, vision and revolutionary idea is supported and endorsed.

Dada Olusegun has in fact, across all states of the federation built a solid structure of highly reputable youths with progressive ideals and capacity. This is to tell you he is foresighted and in the shortest interval, he has reached out and carried all the progressive youths on board.

Reading his manifesto, Eliminating the Rat Race, it tells you that he understands the problems bedevilling the progressive youths and ways to tackle it has been proffered in the manifesto.

The North is 100 per cent with him and you can see this in the collapse of the structure of about 19 former aspirants for the position of Youth Leaders who were zoned out of the contest. They have conjoined their structures and declared support for Dada Olusegun as the next National Youth Leader of the ruling party, APC.

On behalf of the Northern Movement for Dada Olusegun as the APC National Youth Leadership’s aspirant, we wish to reiterate our unflinching support for his candidacy nationwide. He has proven to be a core and loyal party man and he is the voice that the system needs. We believe he has the capacity and has built a structure for national mobilization.

We all know Dada has what it takes to be National Youth Leader of the All progressives congress.
The SouthWest should support and stand by their son who has been a committed and dedicated party man from inception. He has been the building block supporting the region and the country at large at the national level. In all ramifications, he has shown and proven to be a young man well deserving of his aspirations.

We want to assure every card-carrying member of our great party, youths across the federation, men and women of our great party that this force is massively endorsed nationwide and without doubts, this massive support will be reciprocated at the convention ground. This movement is set out to change the political system, the agenda of the youth wing which must be strictly by party loyalty, growth and a reward system for all.

Our ideology and focus at this time are to be part of a better and prosperous Nigeria, and Dada Olusegun will ensure this is put to reality.

Ismail Adamu Alhassan
On behalf of the Northern Progressive Movement For Dada Olusegun.