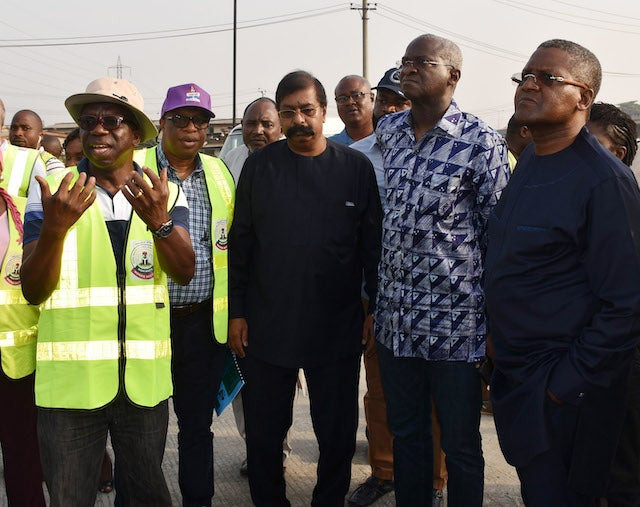 To ensure a continuous network of roads built of concrete from Apapa Port through Oshodi to the Old Toll Gate in Lagos- Ibadan Expressway, the Federal Government is considering the variation of Apapa- Oshodi- Oworonsoki road contract awarded to Messr Dangote Group.
The planned variation would include Section II of the road, which stretches from Beach land Estate/ Coconut through Mile II to Cele, which was not originally part of the N72.9 billion-road contract.

Minister of Works and Housing, Mr. Babatunde Fashola, who, gave the indication at the weekend during the tour of the project, said the section of the road was not included because it was just constructed at that time. He, however stressed the need to include Section II into the existing contract because the section made of the old bituminous type pavement has began to show signs of wears due to the heavy axle load that characterised the usage.

Fashola explained that the contract awarded through a strategic partnership with the Dangote Group using the tax credit initiative in a Private Public Partnership (PPP) model in line with President Mohammadu Buhari’s resolve to ensure an enduring solution to the Apapa port road using the concrete model.

According to him, the presence of heavy deposits of wastes and refuse on the road, which inhibits free flow of water, is slowly damaging the road.He extolled the contractor for the completion of some sections of the road, stressing that the intention of government was to do the work in sections and open completed areas to traffic until its final completion by the end of next year. Fashola expressed hope that business operators that have left Apapa as a result of failed infrastructure will return on completion, as it will spark off property redevelopment and renewal in the area.

The Minister noted that businesses are already picking up at Liverpool and Creek roads because of the ongoing work.
He stressed that the road reconstruction will boost the employment generation drive of the present administration as most of the materials used are locally manufactured leading to endurable and shared wealth.The minister however appealed to motorists to bear the initial inconveniences as a result of the reconstruction as the concrete poured on the reinforcement will need 28 days to cure before concluded sections will be open to traffic. He expressed hope that when the entire road network will be completed, Nigerians will have a road that will last for 40 years.

On his part, the President of Dangote Group, Alhaji Aliko Dangote assured on the quality of road, saying it will be upon completion, one of the best in Africa. He reiterated that the 10 lanes road, which will be completed before the end of 2020, would open up the economy and people, who have deserted Apapa because of bad road, will come back.

Dangote stressed that residents and businesses in the area have been cooperative because of their desire to have their businesses back. He thanked President Buhari for the initiative, saying that it has brought back hope for businesses operating in the area.

According to him, works are going on night and day to ensure that the project is delivered on schedule as his two companies operating in the area lost over N25 billion between 2015 and 2018 because of their inability to get their products out of Apapa.

Earlier, the Federal Controller, Lagos, Adedamola Kuti, stressed that part of Section 1, which starts from Port entrance to Port Novo Bridge spanning about 2.5 kilometers has been completed with Continuous Reinforcement Concrete Pavement (CRCP).

Kuti stressed that works on Liverpool road was delayed because of the challenges poised by relocation of high-tension cable and water pipes.According to him, the public utilities are being relocated following approval from relevant authorities, while works are progressing in other Sections of the road.