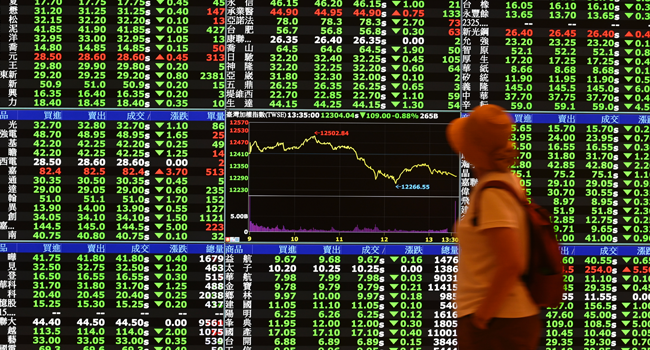 Despite continued uncertainty about the timetable for economic recovery — and with no coronavirus vaccine yet available — investors remain convinced central banks around the world are willing to play backstop and keep monetary policy supportive for years to come.

The wall of cash put up by authorities has been credited with fuelling an incredible surge in world markets from March troughs — led by tech firms which have benefited from people staying at home during the pandemic.

Last week’s harsh sell-off brought that rally to a juddering halt, but analysts do not expect a retreat anything like that seen earlier in the year.

“The sell-off provides a stark reminder that with everybody holding on to the same side of the vaccine life-raft, it should not be too unexpected that when the seas turn rough, many will fall into the drink on the first significant starboard list,” said Stephen Innes at AxiCorp.

“Still, investors have ample flotation thanks to the Federal Reserve, and the fiscal harness would allow them to hurry back aboard with relative ease if they so choose.”

Tokyo piled on 0.8 percent and Sydney climbed more than one percent while Shanghai and Seoul enjoyed healthy rallies. There were also gains in Hong Kong, Taipei, Singapore, Jakarta and Wellington.

London rose in the morning, building on Monday’s rally, though Paris and Frankfurt dipped.

There was little initial reaction to Trump saying he wanted to wind back Washington’s economic relationship with China, warning he would stop US firms doing business with the country from winning federal contracts.

“We’ll manufacture our critical manufacturing supplies in the United States, we’ll create ‘made in America’ tax credits and bring our jobs back to the United States and we’ll impose tariffs on companies that desert America to create jobs in China and other countries,” the president said in a White House news conference.

He also said he would “hold China accountable for allowing the virus to spread around the world”.

The remarks are Trump’s latest outburst against Beijing as he looks to win re-election in November, though observers said that while tensions between the two countries continue, their pledge to stick to the trade pact signed in January has soothed many investors’ worries for now.

OANDA’s Jeffrey Halley said that while markets were unmoved, the latest outburst “further reinforces that US-China tensions are a known unknown and the new normal”.

On currency markets, the pound was unable to bounce back from Monday’s losses after Prime Minister Boris Johnson revived the prospect Britain will not get a post-Brexit trade deal with the European Union, saying if a deal is not struck by October 15 then there will not be one.

That was followed by reports the government was planning legislation to override parts of the Withdrawal Agreement that would undermine issues relating to Northern Ireland customs and state aid.

The eighth round of negotiations resume this week, with both sides talking increasingly tough and sparking accusations of intransigence and political brinkmanship.

The pound has fallen more than three percent from its recent high struck on September 1 but the general feeling among analysts is that the two sides will resolve their differences eventually.

“The key question for markets is whether the remarks are still mostly brinkmanship as negotiations near the finish line; the mild market reaction suggests markets think so and still sniff a deal,” said National Australia Bank’s Tapas Strickland.