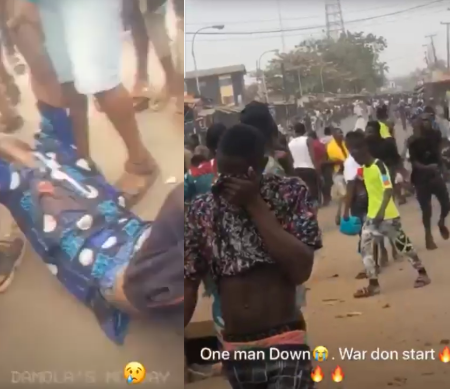 Some aggrieved residents of Sagamu in Ogun state have taken to the streets to protest the death of a player of Remo stars football club, Tiyamiyu Kazeem.

Conflicting reports emerged on Saturday over the death of Tiyamiyu, the Assistant Captain and Defender with the club.

The police claimed that he was knocked down by a vehicle while trying to cross the expressway in order to evade arrest by men of the Special Anti-Robbery Squad (SARS).

But eyewitness accounts said the police officers had “pushed” Tiyamiyu out of a moving vehicle, leading to his death.

The protest on Monday, according to an eyewitness went violent as at least one person was feared dead.

Although the Police Public Relations Officer, Abimbola Oyeyemi, could not confirm this when contacted.

Reports have it that the protest got violent while the aggrieved protesters allegedly attempted to set a police station in the town ablaze.

The protesters were said to have condemned the death of the footballer demanding justice while a thorough investigation into the alleged killing should be immediately instituted.