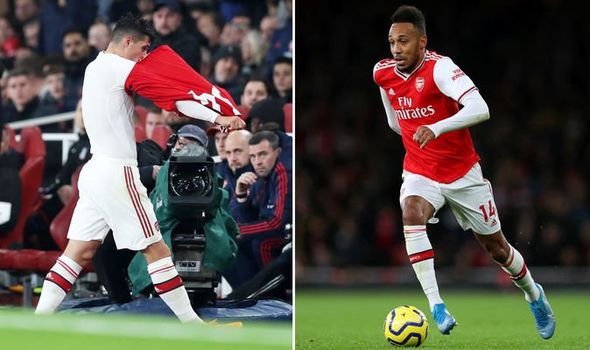 The Switzerland star has seen his tenure in charge brought to an abrupt end after clashes with supporters at the Emirates Stadium
Granit Xhaka has been stripped of the Arsenal captaincy, manager Unai Emery has confirmed, with Pierre-Emerick Aubameyang taking over the armband.

Xhaka, who was named the Gunners’ permanent skipper in late September, succeeded Laurent Koscielny in the role.

But he has increasingly come under fire from supporters with abuse aimed at his conduct and performances, culminating in a encounter with fans during Arsenal’s game with Crystal Palace on October 27.

He has not played for the club since and was left out of their squad for their Europa League trip to Portugal later this week, leading to speculation that he has played his final game for the club.

Reportedly elected to the captaincy on a full-time basis by his team-mates following a number of rotating skippers, Xhaka and the playing group were informed on Tuesday morning of the change in leadership.

Aubameyang, who joined in January 2018, is currently in his second full season at the Emirates Stadium, having claimed the Premier League Golden Boot last term.

The France-born Gabon international has been a standout performer since his arrival in North London and is likely to prove a popular choice to take on the armband.

Xhaka previously apologised for his actions following his substitution against Palace, during which he was seen to cup his ear in response to abuse from sections of the fanbase, whose escalating campaign against the 27-year-old has been brewing for much of the season.

“The scenes that took place around my substitution have moved me deeply,” he stated. “I love this club and always give 100% on and off the pitch.

“My feeling of not being understood by fans, and repeated abusive comments at matches and in social media over the last weeks and months, have hurt me deeply.

“People have said things like, ‘We will break your legs’, ‘Kill your wife’ and ‘Wish that your daughter gets cancer’. That has stirred me up and I reached boiling point when I felt the rejection in the stadium on Sunday.”