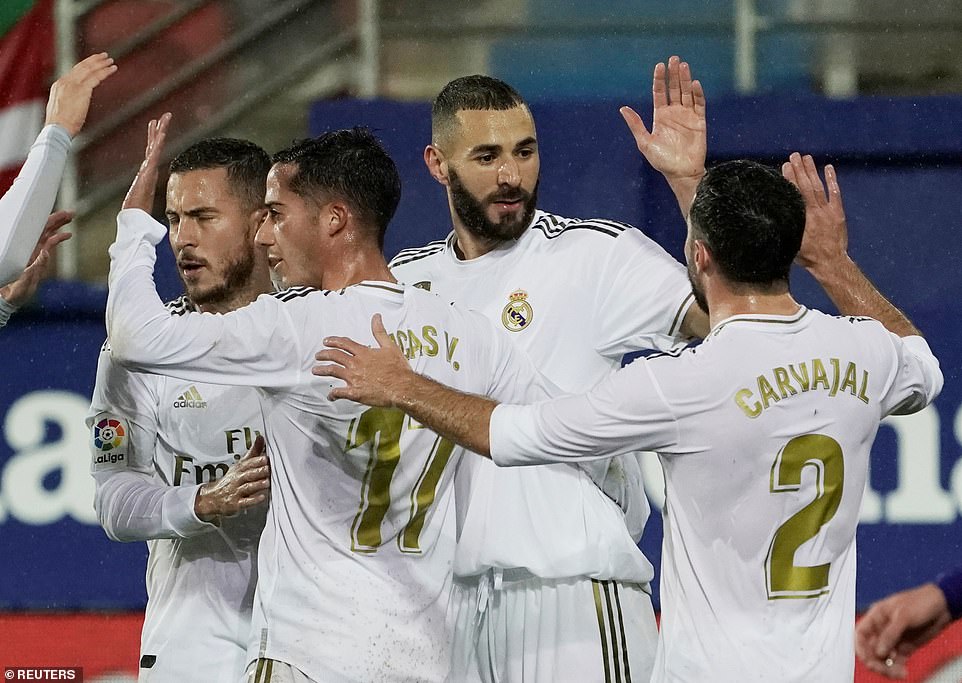 Karim Benzema maintained his impressive form with two first-half goals as Real Madrid eased to a 4-0 win at Eibar that takes them top of LaLiga.

Madrid suffered a 3-0 reverse on their last visit to Ipurua 12 months ago but were comfortable winners in Saturday’s clash thanks to the impressive form of Benzema, who made it nine league goals for the season.

The 31-year-old gave the visitors a 17th-minute lead and doubled his tally from the penalty spot before the half-hour mark after Sergio Ramos had also converted from 12 yards.

Madrid had won only two of 10 away league games since Zidane’s return as coach but did not take long to assert their authority in the Basque Country, Valverde teeing up Benzema to convert the opener from close range.

Ramos tucked away the first of his side’s penalties three minutes later after Pablo de Blasis stuck out a leg and tripped Eden Hazard inside the box.

Madrid put the game out of Eibar’s reach with 29 minutes played, Benzema matching Ramos in sending Marko Dmitrovic the wrong way from the spot following Cote’s challenge on Lucas Vazquez.

After a slow start to the second half, Madrid soon clicked into gear and had a fourth goal through Valverde’s side-footed finish into the bottom-right corner.

Eibar struggled to muster much of a fight in the remainder of the match as Zidane’s men claimed a fifth clean sheet in a row in all competitions.

What does it mean? Madrid move top of LaLiga

Last weekend’s goalless home draw with Real Betis, two weeks on from a 1-0 loss away at Real Mallorca, led to fresh talk of a crisis at Santiago Bernabeu.

However, Madrid beat Galatasaray 6-0 in midweek and were just as impressive here, this win taking them three points above Barcelona, who play their game in hand against Celta Vigo later on Saturday.

Benzema has now netted 11 goals in all competitions this season, this latest brace lifting him above the iconic Ferenc Puskas up to sixth on Madrid’s list of all-time LaLiga scorers.

He also scored a double against Eibar in April and has been directly involved in nine goals in his nine LaLiga games against them.

Orellana struggles to make an impact

Fabian Orellana has been directly involved in five of Eibar’s last six goals in LaLiga, but he failed to register a shot of any note prior to being replaced 25 minutes from time.

Madrid’s first match back after the international break is a home meeting with Real Sociedad on November 23, while Eibar host Deportivo Alaves the following day.