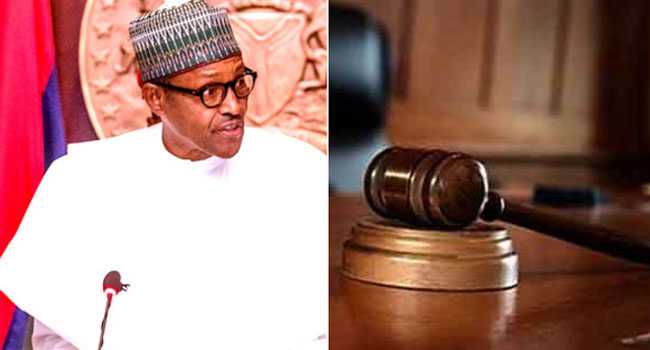 A Federal High Court in Abuja has ruled that President Muhammadu Buhari acted in contravention of the law when he sent the names of 11 candidates recommended by the National Judicial Council (NJC) for appointment as judges of the High Court of the Federal Capital Territory to the Senate for screening and confirmation.

Delivering judgment in a suit filed by an Abuja based lawyer Oladimeji Ekemgba, Justice Inyang Ekwo made the pronouncement contending that the forwarding of the names of the eleven nominees by President Buhari to the Senate was in breach of section 256(2) of the Nigerian constitution.

The judge also agreed with the plaintiff that only the appointment ahead of the court, like the chief judge, required Senate confirmation.

Justice Ekwo however, ruled that the contravention of the law by President Buhari did not affect the judges’ inauguration as the judges have been sworn in by the Chief Justice of Nigeria, Justice Ibrahim Muhammad.

President Buhari had selected eleven names from among the 33 recommended to him in April this year by the NJC for appointment as judges of FCT high court.

The President forwarded the 11 names to the Senate for screening but the upper legislative chamber declined acting on the president’s list having admitted that it had no role to play in the appointment of FCT judges.

Apart from faulting the sending of the names of the judges to the Senate, Mr. Ekengba, also contended that the president lacked the power to pick and choose whom among the candidates to appoint as judges recommended by the NJC.

Joined as defendants are President Buhari, the Attorney-General of the Federation, Abubakar Malami, the clerk of the Senate, the Chief Justice of Nigeria and the National Judicial Council, as the 1st, 2nd, 5th, 6th, and 7th defendants.