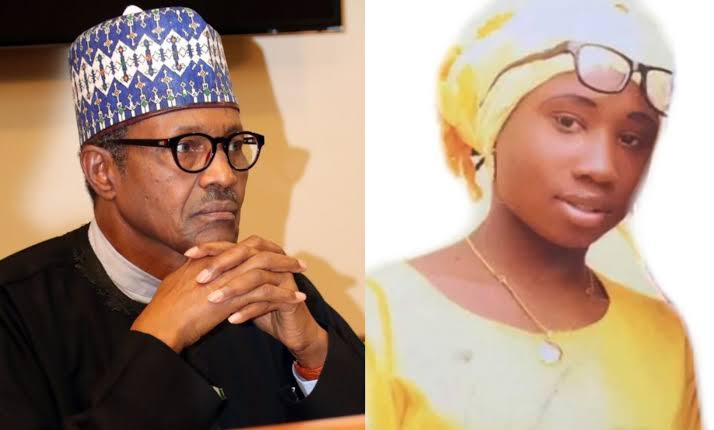 Two years since the teenager was abducted by a faction of the Boko Haram sect – Islamic State West Africa Province (ISWAP), the President said the Federal Government has redoubled its effort towards her freedom.

In a statement personally signed by him, President Buhari regretted that Leah has remained in the custody of the terrorists because she refused to renounce her Christian faith.

He stressed that Nigerians have the right to practice any religion of their choice and nobody has the power to force another to change their faith against their will.

The President, however, gave an assurance that his administration would continue to work to ensure that Leah, as well as other children and captives of terrorists, regain their freedom.

He added that the government would ensure this was done without discriminating against any religion or ethnic group.

On February 19, 2018, some insurgents stormed the Government Girls Secondary School in Dapchi, Yobe State and abducted Leah and about 100 other girls.

A group of protesters demanding Leah Sharibu’s release from captivity.

Weeks after the kidnap, the other girls were released while Leah was kept in captivity by the terrorists for refusing to renounce her faith.

Six months later, an audio clip emerged in which the abducted schoolgirl pleaded with President Buhari to help her regain freedom.

In the clip, Leah also sought help for her family and asked the government to treat her case with passion.

Last year, Leah’s family and the Bring Back Our Girls (BBOG) campaign group commemorated her first year in the insurgent’s custody and called on the government to secure her release.

On the second anniversary of Dapchi, Muhammadu Buhari, President of the Federal Republic of Nigeria makes the following statement:

Two years ago, 110 innocent children from the town of Dapchi were taken, against their will, by the terrorists of Boko Haram. 107 survived the ordeal. Today all but one – Leah Sharibu – are returned to their families.

Now aged 16, Leah remains in the hands of the terrorists – they say because she refuses to renounce her Christian faith.

We say, as the government for and of all Nigerians, that no person has the right to force another to change their faith against their will and that all life is sacred.

This government continues and seeks to secure the release of all children and captives of terrorists – and we do so regardless of their creed or the name of their creator.

As we redouble our efforts for Leah’s return, we can never allow the terrorists to divide us – Christian against Muslim, Muslim against Christian. We are all Sons of Abraham. And all Nigerians have the same worth and rights before the law, and before God.