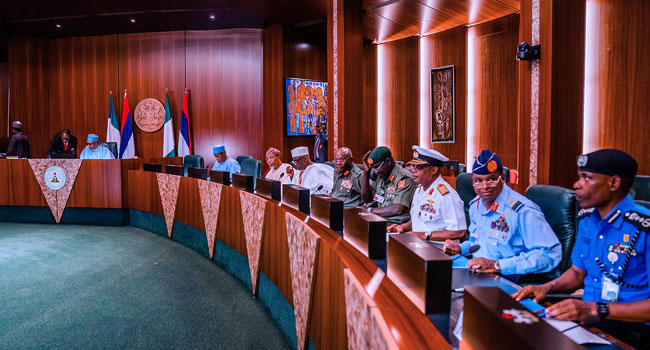 The President, Major General Muhammadu Buhari (retd.), and other members of the  National Security Council on Thursday met 24 hours after Senators and members of the House of Representatives called for the sack of service chiefs.

The National Security Adviser, Major General Babagana Monguno (retd.), who briefed journalists on behalf of the council after the meeting at the Presidential Villa, Abuja,  said the NSC did not discuss the call by the lawmakers.

Both chambers of the National Assembly had on Wednesday  lamented the rising insecurity in the country and called on the President to sack the service chiefs on the grounds that the security heads, who were appointed in 2015,  had outlived their usefulness.

Besides calls for the sack of the  service chiefs,   the Senate Minority Leader, Senator Enyinnaya Abaribe, on Wednesday had demanded  the President’s resignation.

Abaribe  had condemned Buhari who, on Tuesday, said he was surprised  by heightened banditry in the North-West and other  forms of insecurity in other parts of the country.

When asked whether the call by the lawmakers was tabled at the meeting,Monguno replied, “The issue of the National Assembly resolution did not come up at the meeting.”

He, however, said the council was aware of the enormous security challenges facing the country. He said security agencies needed the collaboration of Nigerians to address complex insurgency the country was facing.

Monguno said the meeting called for “wider collaborations” among security agencies on the one hand and the larger Nigerian society to tackle insurgency, banditry and rising cases of kidnapping in the country, on the other hand.

The NSA stated, “There were discussions and at the end of the day, the most important thing that we came up with is the need for collaboration both between governmental agencies and the larger Nigerian society, because of the type of insurgency  we are faced with, the complexities, the multiplicity of all kinds of issues.

The meeting was held amid strident calls across Nigeria on the Buhari regime to restructure the security architecture of the country.

Only on Wednesday, the House of Representatives passed a resolution asking Buhari to sack the service chiefs in order to inject fresh hands into the security management system. They also called for emergency to be declared in insecurity.

Monguno further said the Buhari regime was aware that Nigeria faced enormous security challenges, a reason it was seeking collaboration across Nigeria.

He said, “The challenges, all of us are aware of them; that is why in a nutshell, I said, there is a need for this government and the larger society to work together to find a solution to this problem.

“No one is oblivious of the enormity of the problem at hand. Government is aware and that is why we held this meeting at the highest level.”

The security council’s call for collaboration with Nigerians came on the heels of the South-West states’ move to set up a security outfit, Operation Amotekun, to address killings and other crimes in the zone.

The Federal Government, initially opposed the security outfit, but decided to approve it after a meeting on Thursday attended  by Vice-President Yemi Osinbajo, South-West governors and the Attorney General of the Federation, Abubakar Malami, SAN,

The PUNCH had made several failed attempts to get the two most senior media aides to the President, Mr Femi Adesina and Mr Garba Shehu, to speak on the National Assembly’s decisions. None of them responded to enquiries by the newspaper.

The PUNCH still called Shehu and Adesina at 6.16pm and 6.18pm respectively on Thursday, but none of them picked their calls. Text messages sent to the two earlier were also not replied to as of 6.54pm.

But the Presidency rose in defence of Buhari (on Thursday, denying that Buhari said he was not aware of the security challenges faced in parts of the country.

It said Buhari’s comments while meeting with ‘eminent citizens” from Niger State at the Presidential Villa, Abuja, on Monday, were “twisted” by some publications (not The PUNCH) to suggest that he was not aware of the security challenges of the country.

His media aide, Mr Femi Adesina, in a statement, repeated what he said were the President’s comments.

The statement quoted Buhari, “I was taken aback by what is happening in the North-West and other parts of the country. During our campaigns, we knew about the Boko Haram. What is coming now is surprising. It is not ethnicity or religion, rather it is one evil plan against the country.

“We have to be harder on them. One of the responsibilities of government is to provide security. If we don’t secure the country, we will not be able to manage the economy properly.”

However, the Presidency said Buhari’s comments were slanted the next day by both traditional and online media.

“The reportage of the statement above was slanted to mean that President Buhari said he was unaware of the security challenges in some parts of the country. Far from it, except to the mischievous mind. The President is fully aware and fully in charge of all that is going on”, it said.

The Presidency stated further,  “The statement by the President was clear enough, and these are the salient points, in 2015, we knew there was Boko Haram insurgency, particularly in the North-East, and we mentioned it in our campaigns. There are clear economic and cultural factors behind the clashes that sadly rocked many of our communities, be they the Fulani-Tiv or Fulani-Berom conflict, the Tiv versus Jukun and so on. By now, these conflicts are fairly under control.

“By 2019, banditry had surfaced in the North-West. It was surprising, as the area is almost homogeneous, made up of Hausa-Fulani.  The combatants are largely Muslim. This is what the President said he was surprised about.

“The point he made was that what is happening in the country is not about ethnicity or religion, it is plainly an evil plan against the nation.

“It is disingenuous that the earlier and latter parts of the statement were downplayed, and the middle part misinterpreted to mean that President Buhari was unaware or surprised by the security situation in the country.

“The traditional media, and commentators on social media, are encouraged to keep fidelity to the truth, and not concoct narratives to suit some sinister motives.

In the  House of Representatives,  lawmakers again on Thursday called on the President to show sincerity of purpose on the rising spate of insecurity in country.

The lawmakers decried the insurgency, killings, banditry and kidnapping in various parts of the country. The issues were raised when the lawmakers debated a motion moved by the lawmaker representing Mangu/Bokkos Federal Constituency of Plateau State, Mr Solomon Maren.

The motion, which was unanimously adopted, was titled, ‘The Need to Stop Further Killings in Mangu/Bokkos Communities – Death Toll Has Risen to 32 and Increasing Daily Unabated.’

Adopting the motion, the lawmakers resolved to condemn “these killings and observe a minute silence in honour of those killed.”

The lawmakers  urged “the President to show sincerity and commitment in dealing with the matter, match words with actions and save the country from deepening into anarchy.”

Moving the motion, Maren said, “The House notes the deteriorating security situation in my constituency in Plateau State, which has claimed several lives and property worth millions of naira.

“The House further notes that Kulben, Kwatas, Ruboi, Marish, Murish, Lokudung, Sabon Barki, Pil, Mania and Mbiri-Ishala villages were attacked; 32 killed, three churches burnt down, 10 shops looted and over 200 houses burnt down, with foodstuffs and seedlings destroyed worth over hundreds of millions.

“The House is aware that these attacks which occurred  within two weeks were unprovoked and went on unabated without any intervention to stop them. The House is concerned that if such continues, it will push citizens to start seeking for self-help, which will compound the security situation in the country.”

Bad governance, cause of insecurity in Nigeria – Secondus

On its part, the Peoples Democratic Party  said bad governance was the cause of the rising insecurity  in the country.

The PDP National Chairman, Uche Secondus, during an interactive session with journalists in Abuja, also said it was imperative for the President to declare a state of emergency in insecurity.

Insecurity:  I am worried, says Jonathan

Secondus spoke just as former President Goodluck Jonathan on Thursday said he was worried by rising insecurity in the country.

According to a statement by his media aide, Ikechukwu Eze, Jonathan, however, expressed hope that Nigeria would overcome the security challenges.

Jonathan, while receiving   officials of the National Association of Nigerian Students in Abuja, said he was traumatized by killing of a soldier during an attack on a military outpost near his house on December 24,  2019.

He stated, “I am worried that so many people are becoming victims of sporadic shootings, kidnappings and so on. I believe that the country will get over the kind of insecurity it currently faces.”

Also, on Thursday, the President of the Senate, Ahmad Lawan, said the leadership of the upper chamber would meet with the President on the security challenges confronting the country after its ad hoc committee  had submitted its report.

The 17-member ad hoc panel, led by the Senate Leader, Yahaya Abdullahi, was constituted by  Lawan on Wednesday to interface with military and security agencies in the country on their challenges.

The panel, which is also expected to come up with realistic and practicable solutions to the issue of insecurity, was given two weeks to submit its report.

Speaking further on the issue, Lawan said upon the receipt of the panel report,  the Senate leadership would have a robust engagement with the executive.

He said, “We have passed resolutions now. The second step is for the ad hoc committee members to work assiduously to ensure that they finish their work within two weeks. That will be the second step.

“The third step will be the implementation; in that case we have to work even much more closely with the executive arm of government on those things that we resolved to do.

“It is not everything we resolved on that is going to be operated. We pray that whatever we resolve on is a resolution that will bring solution.

“The executive may have their own opinion on the way forward. So, there will be a need for us to marry the two positions between us and them, to ensure that the lives of Nigerians are well protected.

“As we represent people here, we must not shy away from what affects their lives. The reality is that today, the security of our people is the issue that concerns almost every single Nigerian.

“There is nothing we can do better than to discuss it and  find solutions to the issues at stake.

“This is not something we can do alone;  we have to work with the executive arm of government. Mr President himself has been working very hard to ensure that the security is there to protect the lives of our people.”