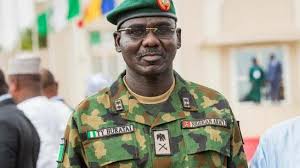 The Chief of Army Staff, Lieutenant General Tukur Buratai has charged troops to apply all the techniques, tactics, and procedures required in the battle and field crafts to deal with bandits in the North-Western part of the country.

This is according to Buratai the best way for the military to handle and deal with these criminal elements terrorizing innocent citizens in the region.

Buratai was speaking in Batsari, one of the Front line LGAs of Katsina state while addressing the rugged special forces of the Nigerian army shortly after having a special dinner with them.

He assures that the Nigerian Army has ordered the purchase of a lot of equipment including additional ammunitions, weapons, platforms, vehicles among others that are on their way to delivery.

He further seizes the moment to congratulate the troops for maintaining the peace and addressing all security challenges bedeviling the country.

According to Buratai, “these types of conflicts are unpredictable and unconventional in nature.

“You have all the advantages that it takes to be a military unit or formation with all the capabilities and training but the best approach to handle this type of security challenge is to apply the same unconventional and special forces concepts in this regard.

“That is why we have made tremendous efforts to make sure that you receive the special training and we will continue to train and motivate you to handle this challenge squarely despite the terrain.

“Try to make good use of the weapons and other equipments to achieve the best desired result.

“So there is no excuse and no failure in military operations. Whatever happens you must try your best to achieve the deserted result”.

“Your efforts have been appreciated by the president and we are pleased with what you are doing. Please keep it up”. He added.

Buratai was in Katsina with a delegation of some principal officers, commanders and other military top brass on operational tour of the military formations and units under the 8 division of the Nigerian army Sokoto.

He also paid a courtesy visit to the emir of Daura, Alhaji Umar Farouq Umar at his palace in the rich historic ancient city of Daura and the district head of Batsari, Alhaji Tukur Mu’azu Ruma at his palace in Batsari, Katsina state.