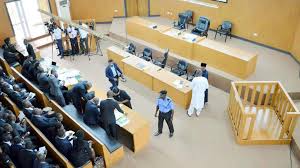 The Code of Conduct Tribunal on Tuesday struck out charges of abuse of office instituted against a former Speaker of the Bayelsa State House of Assembly, Friday Komboyein, and four others.

The three-man bench of the CCT headed by Danladi Umar, took the decision following the inability of the prosecution to produce its witnesses for trial.

The Code of Conduct Bureau had on November 27, 2019 arraigned Komboyein and others for abuse of office following a petition by a then member of the Bayelsa State House of Assembly, Israel  Goli, alleging that the defendants unjustifiably refused to pay him some allowances which were paid to other members of the House since May 2015.

Defence counsel, Mr. Diriyai Dambo (SAN), had earlier requested that the matter be struck out on the grounds that the dispute leading to the institution of the case had been amicably resolved.

He explained to the tribunal that the necessary payments had been made to the petitioner, and that he had since withdrawn his petition sent to CCB.

But the tribunal overruled the request upon the prosecution’s stance that it was ready to continue with the case.

However, on Tuesday, the CCT upheld the request by the defence counsel to have the case struck after the prosecution, again, said they could not provide witnesses unless they obtained the tribunal’s order to compel them to testify in the case.