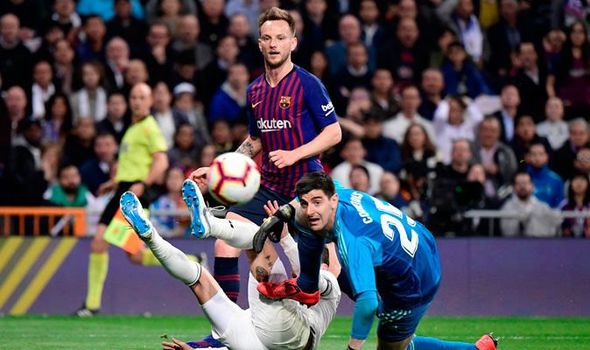 Although these two have claimed six of the last nine Champions Leagues, as 2020 approaches it is clear that the Euro power base has shifted to England
El Clasico is the biggest game in world football, but it did not live up to its billing on Wednesday night.

Barcelona and Real Madrid huffed and puffed but came very far from blowing each others’ houses down in a goalless draw. Europe’s big guns watching the game know they have nothing to fear in the Champions League.

Spain’s bitter rivals are neck-and-neck at the top of La Liga and are quite evenly matched, both still boasting some major talent, but beyond the occasional majestic Lionel Messi pass it was quite visible how far they have fallen from their perch.

Spanish football has dominated Europe for much of the past decade; between Madrid and Barcelona they have won six of the past nine Champions League finals, while Atletico Madrid have also twice finished as runners-up – but a new era has begun as a new decade approaches.

With Liverpool and Tottenham reaching the final last season and all four Premier League teams making it into the last 16 this, it seems power is shifting once again. That was highlighted in the final Clasico of the decade, with two sides who could see each others’ problems but were unable to exploit them.

Madrid have now equalled their worst ever run in the Clasico, without a win in the last seven, although they outperformed Barcelona at Camp Nou. And, with the game at Santiago Bernabeu to go, perhaps have a slight advantage in the title race.

Zinedine Zidane’s side went in at half-time the happier, having recorded 12 shots, the most they have managed at Camp Nou in an opening 45 since at least the 2003-04 season.

Fede Valverde was tidy in midfield, completing 100 per cent of his passes and having two efforts on goal, one which whistled inches wide of Marc-Andre ter Stegen’s far post. The German goalkeeper was alert to stop the other, along with a drive from Karim Benzema.

Barcelona’s defence was by far the busier, with Raphael Varane demanding two penalties within the space of a minute, with replays suggesting he was unfortunate not to get at least one of them.

Barcelona levelled up in the second half but were far from their fluent best, with the game’s backdrop of political tension more interesting than the game at times. Protests about the Catalan political prisoners simmered quietly outside, while fans brought in banners reading “Spain Sit and Talk”.

When Arturo Vidal came on for Nelson Semedo early in the second half, supporters used the stoppage as a launchpad for their protest, lobbing over 20 yellow balls onto the pitch. Play resumed after two minutes but the game was no better for the break.
Even Messi fluffed his lines in front of goal, miskicking a shot when it looked like he might be poised to break the deadlock. The Argentine had delivered two exceptional balls for Jordi Alba earlier in the game, both wasted by the Spaniard. Watching him can make the 90 minutes worth it but the Catalans still appear to be lacking a gameplan.

The quiet Gareth Bale eventually put the ball in the net but Ferland Mendy, who crossed it, was offside by inches and it was duly stricken from the record as the game plodded towards its inevitable and once unthinkable conclusion – the first 0-0 draw in a Clasico for 17 years.

Thoughts in the stands began to drift long before the end, with the smell of burning plastic and the sound of helicopter blades whirring outside becoming increasingly invasive, while 22 men ran around below, not achieving all that much.