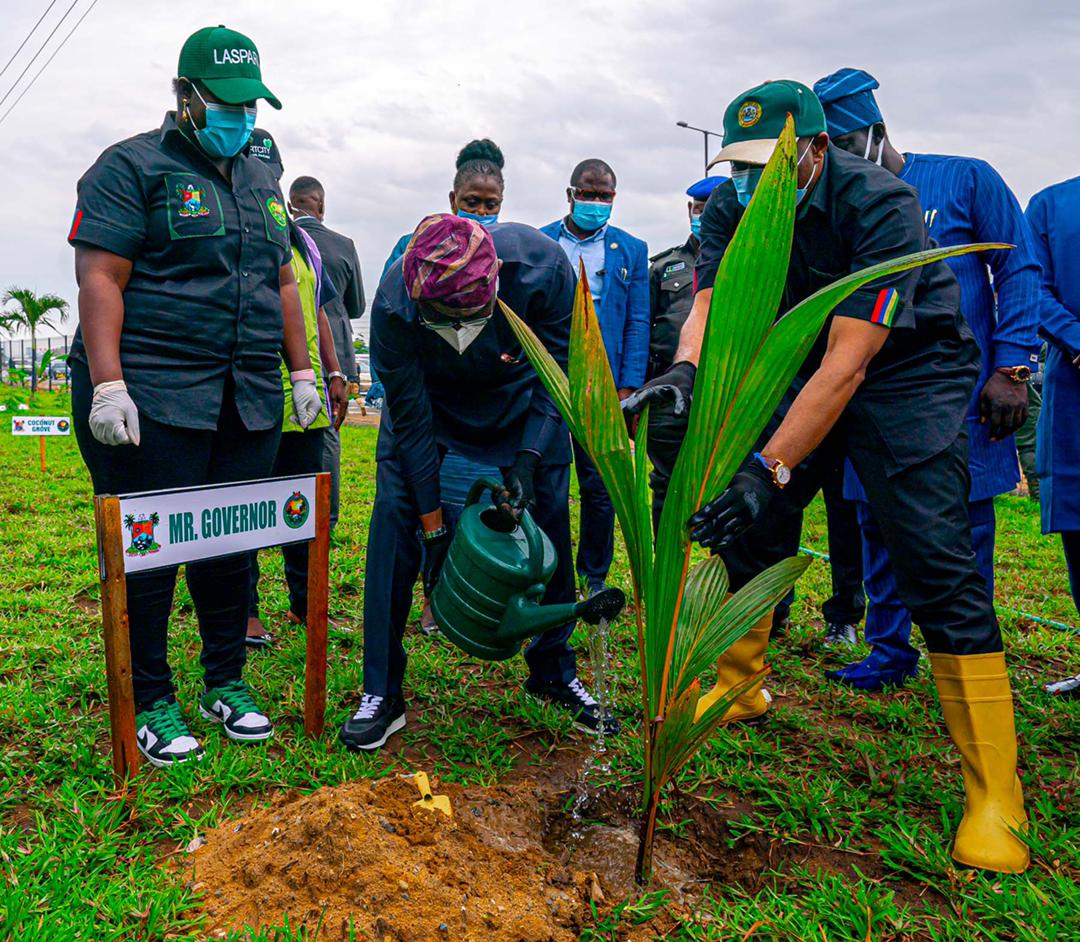 The rapidity of growth in urban population portends grave threat for ecosystems and essential natural assets in Lagos State, but Governor Babajide Sanwo-Olu believes that consistent tree planting approach can help minimize the impact on the State if sustained.

Sanwo-Olu said the cultural and recreational roles of trees make them essential for healthy living and boost human resilience against natural disasters that negatively affect the environment and economy.

The Governor, on Wednesday, planted a tree in Urban Forest Park in Abraham Adesanya area of Eti-Osa, to commemorate the yearly Tree Planting Day in the State. The ceremonial event, with the theme: “Restore and Recover”, was organised by the Lagos State Parks and Gardens Agency (LASPARK), an agency of the Ministry of the Environment and Water Resources.

Four members of the State’s Executive Council appointed by the Governor simultaneously planted trees in four other locations in Lagos. The same action was replicated by chairmen across the State’s 57 Local Government Areas (LGAs) and Local Council Development Areas (LCDAs).

Also at the event, the Governor announced the winners of Wood Craft Competition organised in public schools across the State in which pupils used raw woods to create artworks that depict the theme of the event.

Sanwo-Olu acknowledged the growing commitment of the people to his administration’s Health and Environment programme, asking residents to further join hands with his Government for the restoration of aesthetic of the environment by adopting the tree planting approach.

The Governor stressed the need to arrest further destruction of critical green infrastructure, which may make the State vulnerable to the impacts of climate change, noting that there was need for mutual and sincere actions geared towards the complete recovery of the environment.

He said: “By 2030, it is expected that the urban population will double and urban space will increase. As this happens, ecosystems and the essential natural assets they provide will come under threat. As we expand, it is imperative that natural spaces are both protected and incorporated into urban landscapes. Tree planting is a good way to restore local ecosystems and it is gratifying to note that many Lagosians have become enthusiastic about tree planting.

“Our mutual and sincere efforts are needed for complete restoration and recovery. The first rule for restoration and recovery is to stop the further destruction of critical green infrastructure. It is cheaper to conserve natural habitats than to restore them later. This tree planting exercise highlights the critical importance of trees in healing the world from the devastating effect of disasters and pandemic.”

Sanwo-Olu said his administration placed preservation of the environment at the center of its development agenda, pointing out that a good environment would enhance people’s wellbeing and quality of life.

Other critical steps being taken to fully restore the environment, the Governor disclosed, were contained in the recently launched five-year Climate Action Plan by the State Government, which would make Lagos to project impacts, coordinate responses, and achieve resilience under challenging climate conditions till 2025.

He appealed to residents, private sector and Non-Governmental Organisations (NGOs) to key into the cause and support the Government’s intervention geared towards preserving the environment.

He said: “Our goal is to inspire an urban future where nature is abundant, accessible and co-managed by an active and inspired citizenry. Our desire is to provide green space and environmental education in all communities and create urban biodiversity corridors across the city of Lagos.

“As we intensify efforts towards building the sustainable future we all want, we will ensure that we have an environmentally resilient State with the potential to deliver significant financial, environmental, and social returns capable of attracting private investment.”

Commissioner for the Environment and Water Resources, Mr. Tunji Bello, said the Tree Planting Day commemoration had become the largest environmental outreach planned by the Government to stimulate a State-wide awareness and actions towards protecting the environment.

Trees, Bello said, are useful in absorbing carbon dioxide – a major Green House Gas – and replenishing the environment with oxygen. He added that trees improved the aesthetic value of the environment and boosts soil nutrients, which prevent erosion, minimise flooding, thereby protecting humans from the adverse effects of climate change.

“This event is in line with the theme for the World Environment Day held on June 5. Our long term plan is to green the entire Eti Osa stretch up to Epe. This may take three to five years, but the process has begun. By next year, we would have covered up to the Lagos Business School and then move further until we get to Epe,” the Commissioner said.

The high point was the planting of a tree in the park by the Governor, flagging off the exercise across the State.

LASPARK General Manager, Adetoun Popoola, said the agency had started working with its partners to establish mini botanical gardens in some public primary and secondary schools to give students opportunities of direct contact with nature.