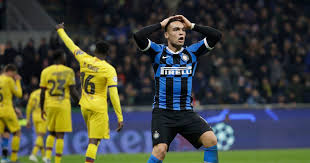 Antonio Conte bemoaned Inter’s poor finishing in Tuesday’s 2-1 Champions League defeat to Barcelona but insisted he had “no complaints” after his side were eliminated from the competition.
Inter needed to at least match Borussia Dortmund’s result against Slavia Prague, but the Germans claimed a 2-1 victory and the Nerazzurri did not do enough in San Siro.
Despite early dominance and a flurry of chances, Inter found themselves trailing in the 23rd minute when Carles Perez swept home.

Romelu Lukaku equalised before half-time, but he was otherwise wasteful and Ansu Fati, 17, secured Barca the three points four minutes from time to become the youngest Champions League scorer in history.
Conte acknowledged Inter had enough clear-cut opportunities to beat Barca.
“We had the chances to win the game, we created those opportunities, but lacked that clinical edge to convert them,” he told reporters.
“I have no complaints to make, as my players gave their all. We just lacked a goal and instead conceded at the other end to go 2-1 down, which really killed us.
“Watching that Ansu Fati goal is painful, as it killed us in every way. We were pushing, creating the chances to score and go 2-1 up.
“I was also disappointed for the fans in San Siro, as they pushed us from start to finish and created a wonderful atmosphere. It should’ve ended differently.
“I think we deserved more in this group. Still, I think it’s all valuable experience. We wanted to qualify, so there is disappointment from everyone right now, but as I told them, we have to raise our heads again.”
Inter centre-back Stefan de Vrij shared his coach’s belief that they have no reason to regret missing out on a place in the knockout rounds.
“We are sad, but we have no regrets because we did everything we possibly could in order to qualify,” he said.
“There’s no point looking back now. We have to focus on the future and the games we have coming up. Difficulties should make us stronger, but obviously for now it’s a fresh wound.”
Inter finished third in the group, meaning they will drop into the Europa League in the New Year. They will find out their next opponents in Monday’s draw.