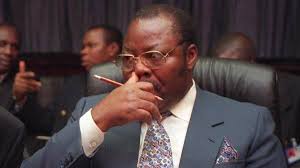 A High Court of the Federal Capital Territory sitting at Gwagwalada, on Thursday, issued a warrant for the arrest of a former Minister of Petroleum Resources, Dauzia Loya (Dan) Etete and two others that were fingered in the alleged $1.1billion Malabu Oil scam.

Trial Justice Abubakar Kutigi issued the arrest warrant on the strength of an ex-parte application and affidavit the Economic and Financial Crimes Commission, EFCC, brought before the court. Others the court said should be arrested are Munamuna Seidougha and Amaran Joseph. EFCC had through its team of lawyers led by Mr Bala Sanga, told the court that the trio have been at large and had since refused to make themselves available for trial.

It alleged that the suspects have been residing in France and were occasionally sighted in different parts of Europe. The anti-graft agency maintained that the order would enable it to collaborate with the International Police (Interpol) to ensure that they are arrested and extradited back to the country for prosecution. The three suspects were mentioned as defendants in corruption charges pending before different courts.

They were accused of complicity in the alleged fraudulent transfer of ownership of Oil Prosecting License, OPL, 245, regarded as one of the biggest oil blocs in Africa.