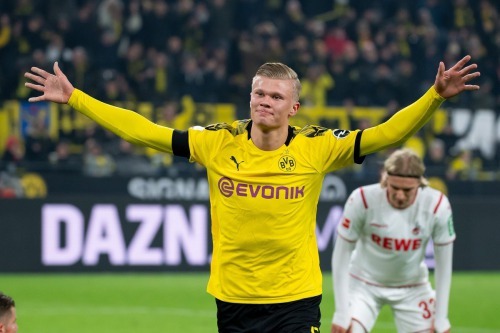 Borussia Dortmund striker Erling Haaland has made Bundesliga history by becoming the first player to score five goals in his first two matches in the division.

The Norwegian’s feat is made more remarkable by the fact that it has been achieved in just 57 minutes of pitch time, meaning that he is averaging an incredible 7.9 goals per 90 minutes for Dortmund.
Unsurprisingly, his feat of scoring five times in such a short space of time for a new club is also a record.

On both of his appearances, the January arrival from Red Bull Salzburg has come off the bench.
His debut was a 34-minute cameo against Augsburg, in which he hit the headlines by scoring with his very first touch and then going on to grab a treble. His second outing was only a little less remarkable as he struck a double for Lucien Favre’s side in a 5-1 victory over Koln on Friday, in which Raphael Guerreiro, Marco Reus and Jadon Sancho were also on target.

Although Manchester United reportedly snubbed him this month for fears agent Mino Raiola would be the controlling influence in negotiations, the player’s representative has indicated that Haaland could be open to a future move to England.

“I think it was the right move to go to Germany,” he said. “Because if you talk about the Premier League and you see the Premier League as the most important point of the pyramid, you need to be careful when you come here.
“I think he’s also preparing himself for the best. He’s so young that he has time to come.”
Dortmund now lie third in the Bundesliga, level on points with Bayern Munich but trailing midseason pace-setters RB Leipzig by four points.