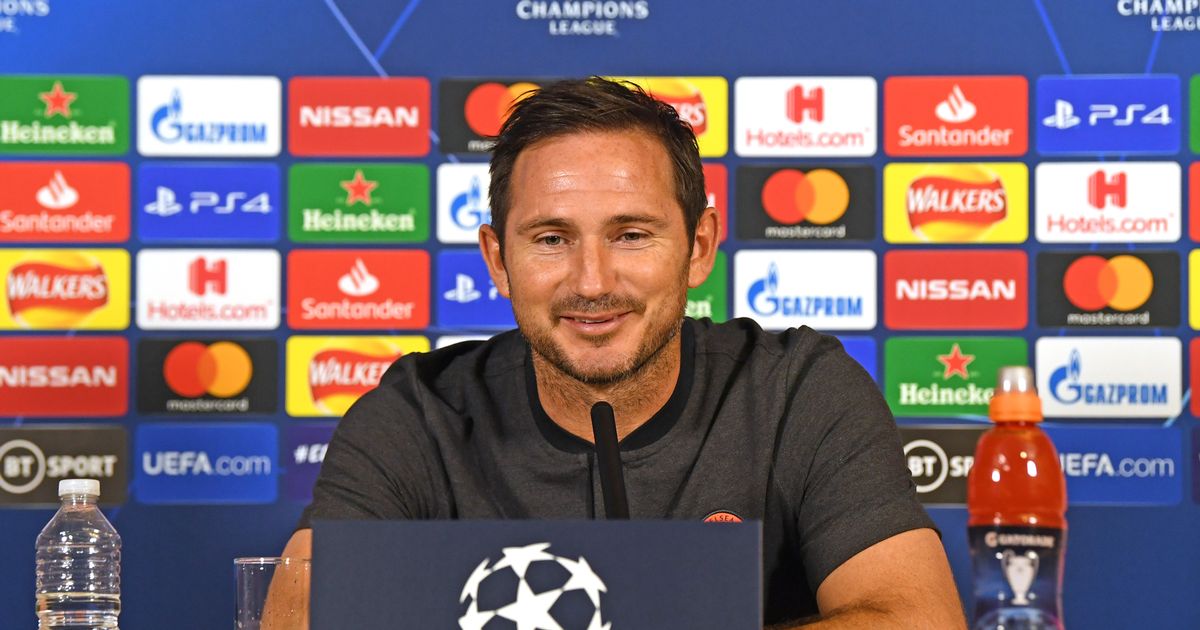 One foot in the next round if you win?

“I wouldn’t like to say that until that foot is officially in the next round. I said at the start that this group would be tight because all the teams could take points off each other.

“Proved to be correct. But we’ve had two good results and another one would be great for us with two games left but we must understand that even though we are at home now, the quality and the danger from Ajax is as much if not more than the game we played away because they are such a good technical team.”

Exceeding expectations, would be massive to get through after first game defeat?

“After losing the opening game, which was disappointing, we have shown a great reaction from that.

“I have to accept it it expected of Chelsea to go through and that is no disrespect to any other teams. I have said already how hard the group is but it is more about our own expectations.

“That is maybe why we had that reaction. We wanted to prove ourselves, we wanted to go to Ajax and Lille and get results. We did.

“The only answer for me is that we must have exactly the same attitude, preparation and input as we did in the last two games because at this level if you don’t, you’re not going to get the results. We won’t get carried away with ourselves in this group and getting the wins to get through this group.”

VAR and the screen to be used…

“Incredible to use it when it is there to be used. We’re in a difficult place and we know that. It happened with us with a penalty against Valencia that we got. The referee wanted to double check and he did that. That’s what it is there for.”

Two weeks ago, what are you expecting from the game?

“I would expect something similar because the game was pretty true. It was a very good Ajax team that had a great record going into that game they had won all their games. I understood that and we knew we had to be at our top level to get that result and I think we were.

“I also think we can improve but we also did the things we needed to do to stop Ajax.

“We gave them some problems ourselves. I thought it was a fantastic game to be involved in, to look back on and we will have to perform at our highest level because I expect more of that from them tomorrow.”

A game decided by fine details?

“Yes, for sure. From my experience of Champions League more than any other competition in world football, details can make the difference because of the levels, because of the need for absolute concentration throughout the game, a small tiny detail can definitely affect a game when it’s close.”

Is N’Golo Kante back?

“He’s in the squad, so he’s fit in terms of… It looks nicely like the injuries and the few niggles he was getting have cleared up. And we’ve been able to get some work into him, it’s always a little bit stop-start before that. But yes he’s in the squad and available.”

Mason Mount, how far can he go?

“I’m really proud of him, obviously his loan spell in Holland and then loan spell with me in the championship I saw first hand the quality and also his character.

“Maybe he has exceeded my expectations this season because I wanted him here for sure. I thought he’d get minutes and be good for us, I didn’t realise to quite what level he would settle and produce as he has produced. So that’s a great story, and the next story is his, it’s up to him. I believe in him. He has to keep working to improve all the time. He’s shown particularly in the game against Ajax, the three midfielders I thought were outstanding because of the work rate they had to put into the game to stop Ajax having control of it, and he did it. So you think of Mason as an attacking midfield player. He’s shown you now that he’s got both sides, hasn’t he? Hopefully he will get even better.”

Midfielders with the freedom to play. Where does Kante fit in?

“In terms of the freedom, call it freedom, that’s just how I want us to play, how we as staff work with the midfield so there’s an element of that at times. Particularly in some games we’ve had to break teams down this season and we need to be able to move. We can’t be too rigid in our positions and too predictable.

“So I think the freedom to interchange when I’m fortunate enough to have players and the three players that just played at Watford for instance, I just mentioned Mason’s defensive qualities, they all can do all roles as such, so I’m very happy for them to be quite fluid in how they play. I also want them to be positive in their play and play forward passes, go by people if that’s one of your attributes, as Mateo has, to travel with the ball at pace.

“That’s been mainly their work because they’ve been the ones doing it, and I just try and push that along and help on that front. In terms of N’Golo, of course it’s huge for us. He’s one of the best midfielders in the world and has been for a few seasons, so I won’t complain about the nice problem that I have with him fit. I want competition. We’re playing every three or four days at the minute so I’m going to need all of them and in different positions as well.

“I also want them to be positive in their play and play forward passes and go by people if that’s one of your attributes, which Mateo has. To travel with the ball at pace. So that’s been mainly their work because they’re the ones out there doing it and I just try to push that along and help on that front.

“And in terms of N’Golo of course he’s huge for us. He’s one of the best midfield players in the world and has been for a few seasons so I won’t complain about the nice problem I have with him fit. I want competition. We’re playing every three or four days at the minute so I’m going to need all of them and in different positions as well.”

How interested will you be by the CAS transfer ban appeal?

“But of course I’m interested because it’s obviously going to affect potentially what we can do in January or not. But it is a little bit down my list to be fair because the matter in hand is Ajax tomorrow and the matter in hand then will be Crystal Palace [on Saturday] and etc.

“I’m not going too far ahead with what happens. We’ll see and at that point we’ll see how it affects us.”

Some Chelsea fans don’t want ban overturned, a compliment to your team?

“We’re on a good run, though, aren’t we? You never know. I get that. That’s a nice feeling. Of course some players have come in and shown with their opportunities they’ve been given that they can do roles and play well. We are getting results at the moment.

“Listen, I think as Chelsea we will always look to improve in windows if we can, if we’re allowed to and if the players we might look at are better or we feel are adding to the squad. But at the minute I’m very happy with what I’ve got so I suppose that’s why, hopefully, fans are as well.”

Why is VAR better in the Champions League than Premier League?

“I don’t know the answer to that. I think the use of the screen on the side of the pitch can be a help because we’ve seen this weekend in the Premier League decisions that firstly they’ve taken a long time to get to, which seems to bring in the fact there’s an element of doubt.

“So for the clarity of the referee on the pitch who has to see things live and make quick decisions, I think the idea he can go and look again has to be a good one. I get there are some arguments around that in terms of fans’ reactions and pressure on referees. But the reading was at the beginning was that it was going to be used sparingly, I think.

“And it hasn’t been used sparingly. It’s been used not at all. I do think that’s probably one thing we could look at. In terms of the Champions League I don’t know the difference. I haven’t studied it closely enough. It just feels at the minute in the Premier League there are things that aren’t right with it.

“I think that’s pretty much universally agreed at this point and I don’t think it’s for the want of trying or anyone having the wrong aims. We all want a better game and the right decision. But at the minute we’re not quite getting that.”

Jorginho and Kovacic, important that they take the ball in difficult positions?

“Yeah, I think it’s hugely important in how I and we as staff want the team to play. We are trying to be fluid in our movement of the ball and, of course, that really does mean moving in through central areas a lot. You’ve got to be able to take balls in tight areas, it’s a huge attribute of those two but it’s also an attribute of a lot of our players.

“You should be willing to accept the ball and be comfortable to at this level of football. Look at the first game against Ajax, the pace and speed of the game, if you are not ready to accept it then it will find you out very quickly.

“We train on that sort of stuff and the players are good at it, but we can get better because I think the best teams do it even better than the rest.”