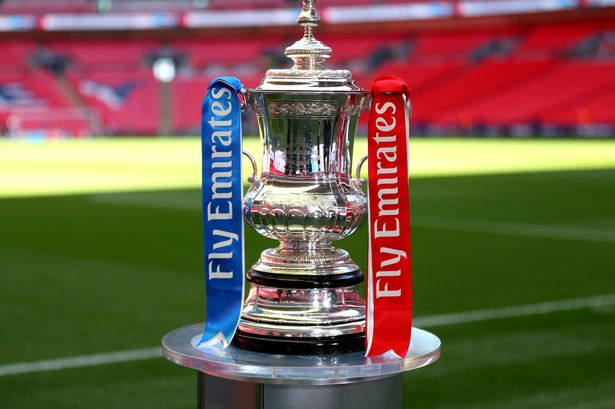 The fixture will see the Toffees travel to Anfield in search of their first win at the stadium for 21 years.

FA CUP: If the Pilgrims can overcome Rochdale in the second round replay, they will play host to Premier League giants Newcastle United in round three – over the weekend of January 3 to 6.978:30 PM – Dec 2, 2019Twitter Ads info and privacy29 people are talking about this

United have been drawn at home against National League side AFC Fylde in the Emirates FA Cup 3rd round following tonight’s draw at the Etihad Stadium.

The Blades will take on the Coasters at Bramall Lane, ties will be played across the weekend of 3rd-6th January.#SUFC Home tie for the Bladeswww.sufc.co.uk458:31 PM – Dec 2, 2019Twitter Ads info and privacySee Sheffield United’s other Tweets20:32

This match comes just after Liverpool travel to Sheffield United on January 2.

#FACup 3rd round Liverpool v Everton! Should Jurgen go with a first choice eleven or the team that’s played in the Carabao cup????1,0038:23 PM – Dec 2, 2019Twitter Ads info and privacy330 people are talking about this

20:32 This match comes just after Liverpool travel to Sheffield United on January 2.

#FACup 3rd round Liverpool v Everton! Should Jurgen go with a first choice eleven or the team that’s played in the Carabao cup????9498:23 PM – Dec 2, 2019Twitter Ads info and privacy315 people are talking about this20:31

We will face @Everton in the FA Cup third round #FACupDraw

A third round Merseyside derby between Liverpool and Everton is the most eye-catching of the fixtures, but Leeds’ visit to Arsenal also looks tasty, as does Wolves against Manchester United.

Non-league Afc Fylde have also been rewarded with a visit to Premier League Sheffield United.20:24

……and that concludes the draw for the Emirates FA Cup third round proper.20:24

…from the draw now – Micah Richards and Tony Adams are both in situ at the Etihad Stadium and look just about ready to pull out the first pair of teams.

You might notice that March 4 is in fact a Wednesday and fifth round ties are being held on that day as a consequence of the forthcoming Premier League winter break.

Replays at the fifth round stage of the competition have also been scrapped.20:06

All of this season’s third round ties are set to take place across the weekend of January 3 and January 6.

All 20 Premier League teams and all 24 Championship clubs enter the competition in the third round proper.

National League side AFC Fylde went through to the third round after their win over Kingstonian at the weekend, and four other non-league sides – Boston United, Eastleigh, Hartlepool United and Solihull Moors – could join them.

Solihull host League One Rotherham United after the draw takes place as they seek to secure their place in the third round.

CITY BIDDING TO MAKE IT SEVEN

Manchester City won the FA Cup for a sixth time last season after an emphatic 6-0 win over Watford in the final.

They trail Liverpool in the Premier League by 11 points so the FA Cup could well be one of the most realistic paths to trophy success for them this season.