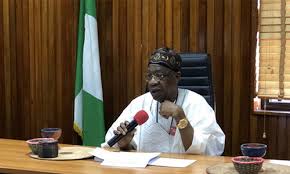 The Federal Government says it has recovered looted funds in excess of N800 billion with over 1,400 convictions secured.

The Minister of Information and Culture, Lai Mohammed, disclosed this on Tuesday at a press conference in the nation’s capital, Abuja.

He said, “As I said earlier, this administration’s fight against corruption is as strong as ever, and we have the records to back up this claim.

“This administration has recorded over 1,400 convictions, including high profile ones, and recovered funds in excess of N800 billion, not to talk of forfeiture of ill-gotten properties. This is no mean feat.”

According to the minister, Nigerians have recently been inundated with allegations of monumental corruption in a number of government agencies.

He listed some of the agencies to include the Niger Delta Development Commission (NDDC), the Nigeria Social Insurance Trust Fund (NSITF), and the Economic and Financial Crimes Commission (EFCC).

Mohammed faulted those he described as ‘naysayers’ for misinterpreting the recent developments as a sign that the corruption fight of the Muhammadu Buhari administration was waning.

He, however, insisted that the fight against corruption which he said was a cardinal programme of the government was alive and well.

The minister said, “Remember, gentlemen, that the fight against corruption is not about loot recovery or convictions alone. We are also putting in place enduring institutional reforms that will deter acts of corruption.

“Here we are talking about the Treasury Single Account (TSA), the Whistleblower Policy, the expansion of the coverage of the Integrated Payroll Personnel and Information System, as well as the Government Integrated Management Information System and the Open Government Partnership and Transparency Portal on Financial Transactions, among others.”

He, therefore, asked those criticising the government’s anti-corruption fight to stop engaging in wishful thinking and focus on the full ramifications of the fight.