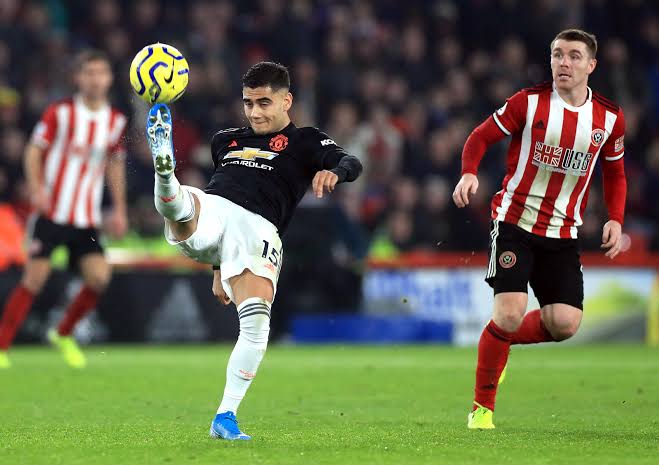 Manchester United’s midfield pairing of Fred and Andreas Pereira is not good enough for a mid-table Premier League side let alone a club of the Red Devils’ stature, according to Gary Neville.

The Brazil internationals once again started in the heart of Man Utd’s midfield during Sunday’s clash against Sheffield United at Bramall Lane.
However, they struggled to get a grip on the game as the Blades stormed into a 2-0 lead early in the second half, though the match eventually finished in a thrilling 3-3 draw.

Former Man Utd defender Neville believes the duo just aren’t good enough for a team of United’s size and ambition, though he did point to mitigating factors including injuries to key players that have forced manager Ole Gunnar Solskjaer’s hand.

Reflecting on United’s performance in south Yorkshire, Neville told Sky Sports Monday Night Football: “I’m disappointed with their away performances in general and the way they approach the games.
“Defensively the system didn’t work in terms of the back five in the first half. It looked like one team knew how to play it and the other didn’t.
“The midfield I’m not going into because Fred and Pereira is not a midfield. It is not a midfield for a mid-table club let alone one of the top spending clubs in Europe, though they have got injury problems and other issues in that area.”
Neville also renewed his criticism of the team’s front three, Anthony Martial, Daniel James and Marcus Rashford, having labelled them a “joke” during the game on Sunday.
He feels the trio have plenty of talent, as demonstrated by their role in Man Utd’s stirring second half comeback, but do not work hard enough over a full 90 minutes and perhaps suffer from a lack of experienced leadership on and off the pitch.
“What disappointed me was the lack of penetrating runs with and without the ball of the front three. I felt they could have done much more for the team,” added the former England full-back.
“That front three are the spark, they are the ones that win the game for this current team. They’ve got so much talent.
“There are two front threes in this league for the top two clubs, Manchester City and Liverpool, that are absolutely outstanding. They are at it every single game, They fight for the ball and fight without the ball.
“They are not bad lads, and we know they have talent as they proved in the final 20 minutes, but there is something fundamentally wrong there in that first 70 minutes of the game – that cannot happen at that club.
“I can expect inconsistency from young players in terms of performance levels, missing chances and decision making. What you can’t expect is inconsistency around work ethic, application and attitude.
“I’ve come to the conclusion on two things. One: they haven’t got senior players setting the standards for them to let them know what’s required in a football team.
Wilder ‘delighted’ with McBurnie after dramatic Man United equaliser
“When I first broke into the team I had people around me to let you know where to go.
“[Juan] Mata and [Ashley] Young are on the bench, [Paul] Pogba is injured, [Nemanja] Matic is looking to get away. The experienced players in the club are in turmoil a little bit. So the [youngsters] are all out on that pitch together.
“And one more thing: they don’t know how to approach and Premier League away game. They don’t understand it is different play at Old Trafford than it is at home.”