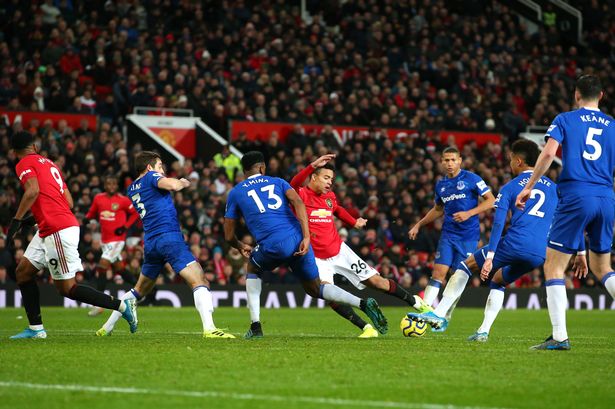 Mason Greenwood has all the qualities of a “top centre-forward”, according to Gary Neville, who believes that the teenager is already a “better finisher” than Marcus Rashford.

The 18-year-old grabbed his seventh goal of the season in a Premier League clash with Everton at Old Trafford on Sunday.

Greenwood’s low drive in the 77th minute cancelled out Victor Lindelof’s first-half own goal to earn United an important 1-1 draw, which keeps them in the hunt for a top-four finish.

The Red Devils struggled to find a way through Everton’s stubborn rearguard until Greenwood came off the bench in the second period, living up to his reputation as one of English football’s brightest young prospects once again.

Greenwood now has more goals to his name across all competitions this term than first-choice centre-forward Anthony Martial, who has struggled for form and fitness over the last few months.

At the moment, Rashford is United’s top goalscorer on 13, but Neville has described Greenwood as the “real deal”, insisting the academy starlet is already ahead of his club colleagues when it comes to “composure” in front of goal.

“I like Greenwood a lot,” he told Sky Sports. “The composure that he shows at such a young age, his great physical presence.

“The way in which he finishes is that of a top centre-forward. Sometimes when you see a young player in front of goal, they panic a bit and snatch at things – [Daniel] James and [Jesse] Lingard do that quite a lot.

“But I’d say Greenwood is a better finisher than Rashford – and that’s saying something. He really does look the real deal. I think Solskjaer knows that and he’s going to bleed him in.”

Greenwood’s latest effort fittingly marked the 4000th consecutive game in which United have included an academy player in their matchday squad.

The Red Devils were, however, unable to regularly break down an opponent content to sit back and soak up pressure, which has been a recurring theme at the start of the season.

Neville went on to express his belief that “two or three” extra additions will be needed for Solskjaer to complete United’s transformation, highlighting their need for a creative player capable of “pulling the strings” in midfield.

“United still need those transfer windows, they still need those players into the club,” he added. “We are still going to see inconsistency. There just isn’t that quality, experience, patience; how to navigate a team that plays compact and is soaking up the pressure.

“Time and time again this season, when teams just force Manchester United to come forward a little bit, they have a problem – they haven’t got the quality to break them down. If a team comes at Manchester United and they can play on the counter-attack, they’re devastating.

“They’ve beaten Tottenham, Manchester City, Chelsea, Leicester – teams that have got real ambition – but they struggle in games where teams sit off them a bit. That just tells you where this team is at. They’re still short.

“You saw it with 20 minutes to go against Everton, they needed someone in midfield who could pull the strings, someone up top who could lead the line and bring other players into play. That’s something that’s desperately missing at the moment.

“Solskjaer himself will want two or three quality players in as quickly as possible so these youngsters can demonstrate their real quality.”