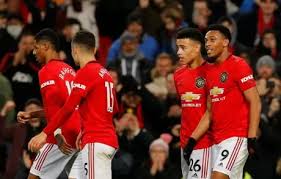 The teenage forward is starring at Old Trafford and his boss of taking notice of him and his fellow strikers, who all scored against Newcastle

Ole Gunnar Solskjaer has lauded his strike force, and particularly Mason Greenwood after the 18-year-old, along with fellow attackers Marcus Rashford and Anthony Martial, scored for Manchester United against Newcastle United.
Solskjaer’s Red Devils had fallen behind to a Matty Longstaff strike after 17 minutes but roared back. By the time the half time whistle sounded, they were leading 3-1, and each member of the forward line had scored.
Martial added a second for himself and fourth for the team soon after the interval, completing the scoring.
Greenwood now has eight goals in all competitions this season, and only Jadon Sancho has more as a teenager in Europe’s Top 5 leagues this campaign.

His boss, a famed Old Trafford goal-scorer himself, was quick to praise the youngster, and his fellow forwards.
“Mason [Greeenwood] is a great striker of the ball,” he said.
“You know he is going to hit the target more times than not. The way he strikes it is nice to see and he is so unfazed by whatever happens.
“The three of them are a handful when we can get the space we did today.
“These boys will never give up, this club knows that towards the end we can nick a point or even three from losing positions.”
Greenwood has now scored in back to back home games, just the fourth United teenager to do so, joining Ryan Giggs, Wayne Rooney and Federico Macheda.
His recent good form has coincided with the re-emergence of Paul Pogba. The French midfielder did not make the start but was fit enough for a half-time introduction, having missed 10 of the last 11 United matches.
Solskjaer says his recovery is on track, and that he expects continued improvement from the team’s most expensive player.

“It is still a bit early for him, he has been out for a long time but he has to get used to being back on a big pitch,” he went on.
“We have had some five-a-side but not with 21 other men on the pitch, He will get better and better.”
United’s next game is against Burnley on Saturday, with Solskjaer calling the fixture congestion around the festive period “not fair”.