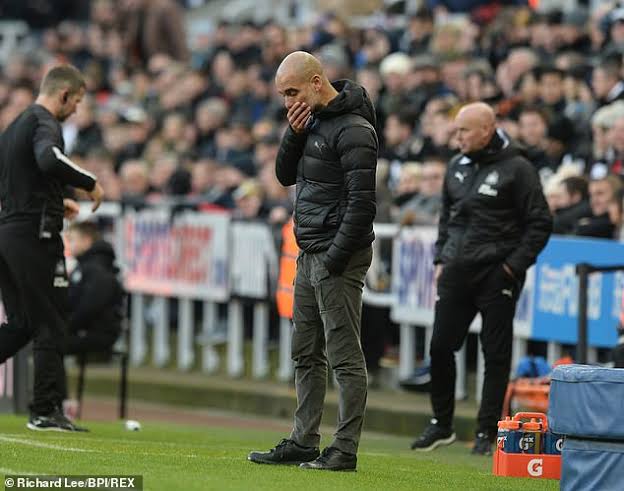 Jonjo Shelvey’s late strike secured a 2-2 draw for Newcastle United but Manchester City boss Pep Guardiola was not too hard on his team.

Pep Guardiola insists he was happy with his side’s performance despite Jonjo Shevley’s late strike for Newcastle United denying Manchester City all three points on Saturday.
City looked like they were heading for a slender win after Kevin De Bruyne’s stunning 82nd-minute strike, but Shelvey whipped home from 25 yards to seal a 2-2 draw for Steve Bruce’s side.
City were far from their fluid best at St James’ Park and could end the day 11 points behind leaders Liverpool if Jurgen Klopp’s side overcome Brighton and Hove Albion at Anfield.

Guardiola, though, felt his players performed well enough to have taken all three points.
“We played at a good level,” he said.
“Defending set-pieces and everything, we move the ball well, we found spaces outside, especially with Benjamin [Mendy], we arrive in front of goal many, many times but we couldn’t score.”
Asked if he was frustrated by the perceived negative tactics of the hosts, Guardiola responded: “It’s what we have lived with for the last four years – it’s always like this. We found a way today but at the end we conceded a goal.
“It was a tight game like we expected, they defend solid, had 10 players in the box.
“It’s one of those days, they defend so deep, we play so good. Maybe in the first half we should move more left-right-right-left, but we create enough chances. We conceded two short on target and concede two goals.
“The way we played was really good, we created chances and 10 players in the box is not easy, [Martin] Dubravka made good saves.”
City afforded Shelvey far too much space on the edge of the box when he crashed home a late leveller, with Guardiola conceding that his side should never have allowed such a situation to arise.
Fernandinho conceded a free-kick for a rash challenge on Javier Manquillo, with the Blues then left to pay the price.
Guardiola said: “At the end we shouldn’t concede the free-kick and Shelvey made the difference.
“Shelvey put it in the corner, [but] we could have avoided it in that position.”