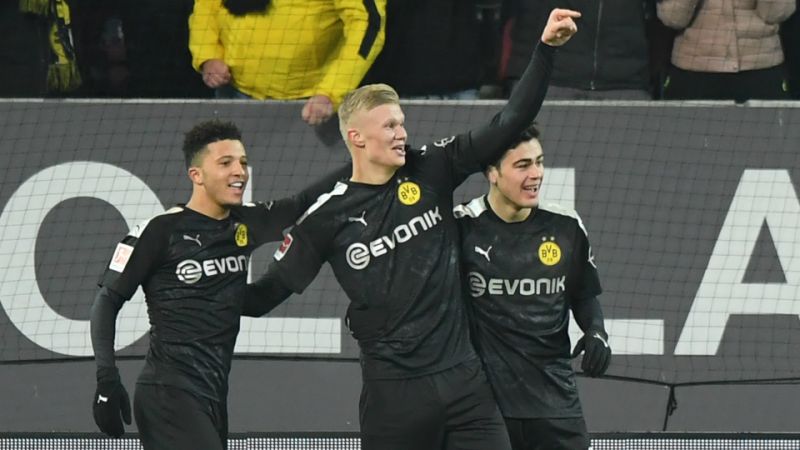 The prolific Norwegian striker, who opted to head for Germany over a switch to Old Trafford, is up and running in the colours of a new club

Erling Haaland scored with his first touch for Borussia Dortmund, before going on to complete a hat-trick, with the Norwegian striker stepping off the bench against Augsburg to show Manchester United what they missed out on.

Having become the most sought-after frontman in European football, the 19-year-old opted to continue his development in the Bundesliga.

Fellow countryman Ole Gunnar Solskjaer had been hoping for a reunion at Old Trafford with a player he previously worked with when in charge of Molde.

United were snubbed, with Dortmund securing a prized signature.

They opted to ease the talented teenager into new surroundings when making a return to action after the winter break on Saturday.

Haaland was, however, to make an immediate impact after being handed his debut off the bench just before the hour mark.

He had been on the field less than three minutes when opening his goal account for Dortmund.

The youngster, who had been prolific for previous employers Red Bull Salzburg, also required just one touch in which to make his presence felt.

Haaland was not done there, with a stunning cameo seeing him find the target again within 10 minutes of his introduction.

Having recorded his first goal in the 59th minute, his second arrived 11 minutes later.

His introduction helped Dortmund, who were facing up to another frustrating afternoon, to turn an thrilling clash with Augsburg on its head.

Haaland was thrown on with the Bundesliga title hopefuls training 3-1.

He grabbed them a lifeline, before Jadon Sancho restored parity shortly afterwards.

Haaland then fired Lucien Favre’s side in front with a third goal for Dortmund in the space of a remarkable 11-minute spell.

Having been acquired to make an impact for Dortmund in the final third, Haaland collected a first match ball of his time in Germany in the 79th minute.

With Augsburg reeling, the youngster completed his hat-trick inside 23 minutes of joining the action – joining Pierre-Emerick Aubameyang as the only man to net a treble on debut for BVB.

He had been sent on in place of Lukasz Piszczek, who had taken in 56 largely uneventful minutes.

Dortmund will be hoping that this is just the start for their new superstar striker, with United left to reflect on what could have been as their attention turns to alternative targets in the winter window.