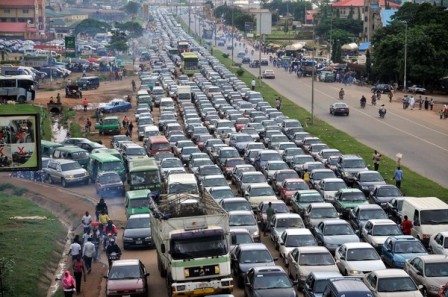 The usual heavy traffic associated with the popular Lagos-Ibadan expressway reached a new height on Tuesday, forcing users to cry out on social media.

Reports has it that both lanes (in-bound and out-bound) of the expressway is currently blocked, causing a major traffic bedlam.

So If you are traveling into Lagos or outside Lagos using the Lagos Ibadan expressway, just go back and sleep at home, today isn't a good day to pass that road, as both lane is on total lock down.

Don't say I didn't do anything for you in this life.

The Federal Government had also earlier announced its intention to suspend the repair work as from December 14 so as to ease the burden on travelers during the yuletide celebrations.

The repair works will, however, resume by January 2020 after the Christmas and new year celebrations.

Twitter users are making comments over the current situation of the Lagos-Ibadan expressway:

You never know what year you'd arrive at your destination… pic.twitter.com/2Kux2G3kfp