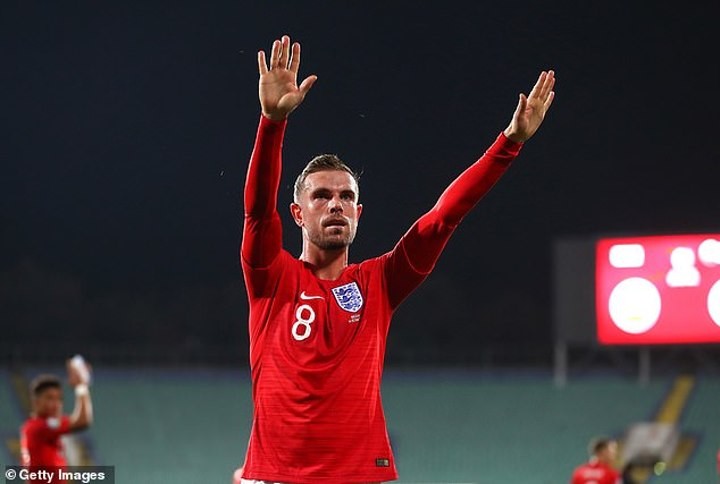 The Liverpool skipper has been rewarded for a fine 12 months with a rare individual accolade, beating out the two favourites for the gong
Liverpool midfielder Jordan Henderson has claimed the 2019 England Men’s Player of the Year award ahead of Manchester City forward Raheem Sterling.

Sterling, 25, helped himself to a domestic treble of the Premier League, FA Cup and Carabao Cup with Manchester City last season, managing 35 goals and 14 assists in 2019 across all competitions.

However, 29-year-old midfielder Henderson, who captained Liverpool to a Champions League triumph, before leading them to UEFA Super Cup and FIFA Club World Cup glory this season, pipped Sterling to the post.

Kane hit a whopping 12 goals in 10 England appearances in 2019, registering a further five assists, but silverware continues to elude the Spurs forward at club level.

Elsewhere, Lucy Bronze was crowned the England Women’s Player of the Year for 2019 for the second time in her career.

The 28-year-old finished ahead of Ellen White and Beth Mead in second and third, respectively.

Bronze, who plays for Lyon in France, also won the Champions League this year at club level, while helping England to reach the semi-finals of the Women’s World Cup as well as winning the SheBelieves Cup.

The right-back picked up 18 caps from a possible 20 this year, taking her to a total of 81.

Bronze has already won another individual accolade this season, becoming the first English player to win the UEFA Women’s Player of the Year after winning a quadruple with Lyon.

Alongside the Women’s Champions League, she helped Lyon to a Division 1 Feminine title, a Coupe de France Feminine and a Trophee des Championnes.

The Lionesses play their first fixture of 2020 in March as they seek to defend their SheBelieves Cup in the USA, while the Three Lions have friendlies against Italy and Denmark at Wembley in the same month as their preparations for Euro 2020 continue.

A trip to Austria and another Wembley fixture against Romania are also scheduled for early June as warm-up games before the tournament kicks off with a group-stage clash with Croatia, who knocked England out at the semi-final stage of the World Cup in 2018.