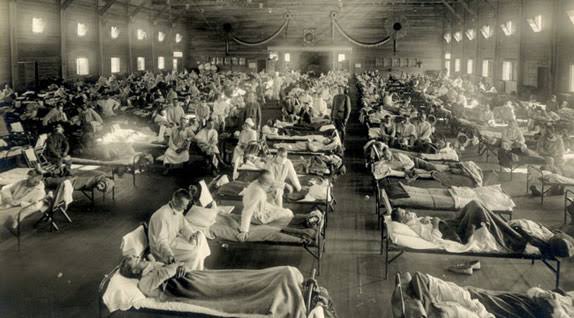 106 years after Nigeria is faced with another pandemic – Coronavirus

In this season of Coronavirus pandemic, let us look back at some devastating epidemics that has affected us in the past.

The 1918 influenza pandemic was the most severe pandemic in recent history. It was caused by an H1N1 virus with genes of avian origin. Although there is no universal consensus regarding where the virus originated, it spread worldwide between 1918-1919.

It is estimated that about 500 million people or one-third of the world’s population became infected with this virus. The number of deaths was estimated to be at least 50 million worldwide according to the CDC.

About 500,000 Nigerians, out of a population of 18million, died in less than 6 months, and  between 50 and 80% of the population was stricken. The over-crowded urban centers (Yorubaland)  were the hardest hit and, even though the pandemic declined almost as suddenly as it began, morbidity, mortality, and panic adversely affected the productive capacity of the country.

The Influenza officially hit Lagos on 14 September 1918 (Public Record Office, London) The 1st case in Lagos was confirmed on 14 Sept. Three crew men of the SS Panayiotis were discovered by Dr Gray, a colonial medical officer, to be seriously ill and lying on the Iddo wharf.

These three crew men were removed to the infectious disease hospital in Ikoyi after they were diagnosed with the disease. The ship was ‘arrested’ and disinfected by the sanitary authority & subsequently sent to the pool; a sort of quarantine area for disinfected ships.

By mid-September, all the merchant ships anchored in Lagos were infected. In fact one of these ships was credited to have caused the wide spread of the influenza in Lagos.

More precisely, SS Bida was said to have been “the chief means introducing the influenza to Nigeria” (Public Record Office, London, 1919).The SS Bida had left the Gold Coast & arrived in Lagos on 14 Sept with 239 passengers. The inadequacy & complacency of Lagos sanitary control was exposed when all passengers had been let free without thorough examination, left to disappear & intermix with the local population.

The complacency of the sanitary officer in charge of the sea port of Lagos was later confirmed by the Ag Governor in a memo to the British Secretary of State. More cases of infected passengers on the SS Bida were recorded than for any other ship anchored at Lagos at that time.

The following examples were some of those reported and linked to the ship:

*A first class customs clerk went to see a medical officer on 18th Sept; became very ill on the 22nd, was sent to the Infectious Diseases Hospital IDH (same hospital were the persons infected with coronavirus about 102 years later) on 23rd as a case of influenza; died the same day.

It was found that a woman was ill in the man’s house on the 15th and that she was a passenger from Secondee by the S.S. “Bida” she left by train on the house on the 23rd, and was removed to the IDH.

A krooman, from the S.S “Bida” was found in the street on the 23rd; he was partly unconscious, and his address in Lagos could not be obtained.

On the 24th, a Customs Clark, living in the same compound as another Government clerk and a girl, who are both natives of the Gold Coast. It was declared, though later denied, that they had been in contact with passenger from the S.S “Bida”.

The cook of a government official, on the 25th; he lived in a compound which passengers from S.S. “Bida” were said to have visited. Also a Customs Clark, who worked in the same office as case of 18th September, his sister and son on the 26th. There were many more such cases.

The colonial government struggled to control the infection. From 14 September when the infection was first confirmed in the city, cases of infection were reported every day from ships coming in from neighbouring colonies.

The rate of its spread and the rapidity at which it claimed its victims was unimaginable. The victims cut across the social stratum as members of all classes were infected by the influenza.

Within the first hours of the outbreak, the medical facilities of the colonial hospital and the infectious disease hospital were overstretched. Victims were lying on the street, while rescuers also became victims.

In the first 2 months of the outbreak enormity of the casualties was overwhelming. 2,806 natives and 116 European and non natives were infected. 243 natives eventually died, as well as 7 none natives in cases referred from Lagos port alone. Lagos lost 1.5% of it pop of 81,941.

The influenza was declared as an infectious disease through public notice. This legal recognition of the epidemic provided the colonial state with the mandate to intrude forcefully and sometimes aggressively into the private houses of people; this was unprecedented in Lagos.

These visits were objected to by some Lagosians; they believed that it would under- mine their privacy. It caused massive social & economic dislocation as the people began to run out of Lagos, further spreading it, while those who could not leave concealed their sickness.

To reverse the attitude of the people, the government offered to organise the whole of the house-to-house visits by natives, working in conjunction and under the direction of the sanitary authority.

Still, people from Lagos, out of fear,  reportedly fled the infested town to other parts of the country. Since the train was the major means of transportation back then, it was a little shocking that in no time the virus spread to Abeokuta, Oyo, Owerri, Onitsha, Nupe, Kantagora, Muri, Nasarawa,  Warri, Ogoja, Calabar, Ibadan, Illorin, Bida, Jebba, Zaria, Kano, Bauchi, Bornu and Yola.

On 7 October, a general meeting was convened in Lagos where Dr Foy, Senior Sanitary Officer, Dr Beringer and Dr Obassa, a native medical practitioner, addressed the people on the need to allow the house-to-house visits.

The support of Mr Kitoyi Ajasa was solicited by the government to use his newspaper to publicise the scheme; this is evident from studying The Nigerian Pioneer from 1918–1919.

Ships and houses were sprayed with sulphur fumigation and with solution of the cyllin disinfectant. The process was discontinued at one point by the medical and sanitary department chiefly because of shortage of the disinfectant and shortage of labour.

This scenario was reduced to a common joke among the people: Owo re, ikure, oyinbo pe e ko wa gba (here is money, here is death, the white man is calling you to come and take).

By mid-1919 the pandemic came to an end, as those who had been infected either died or developed immunity against the virus. There was no vaccines for the disease or scientifically accepted treatment plan, Medicine as you now know,  was still in its primitive stages but the colonial government and health authorities adopted the practice of self-isolation and restriction of movement as a way of curbing the spread.

Since 1918, the world has experienced three additional pandemics, in 1957, 1968, 2009 and most recently in 2019/2020. These subsequent pandemics were less severe and caused considerably lower mortality rates than the 1918 pandemic.

The 1957 H2N2 pandemic and the 1968 H3N2 pandemic each resulted in an estimated 1 million global deaths, while the 2009 H1N1 pandemic resulted in fewer than 0.3 million deaths in its first year. Still doubtful of the total deaths that COVID-19 will eventually cause globally.

This perhaps begs the question of whether a high severity pandemic on the scale of 1918 could occur in modern times except coronavirus?

During the 1918 pandemic, churches, mosques, markets were closed down by the colonial masters to stop the spread of influenza similar to what the government has done in this century. There was a total lockdown.Source: Managing Epidemic: The British Approach to 1918-1919 Influenza in Lagos. By Jimoh Mufutau Oluwasegun.