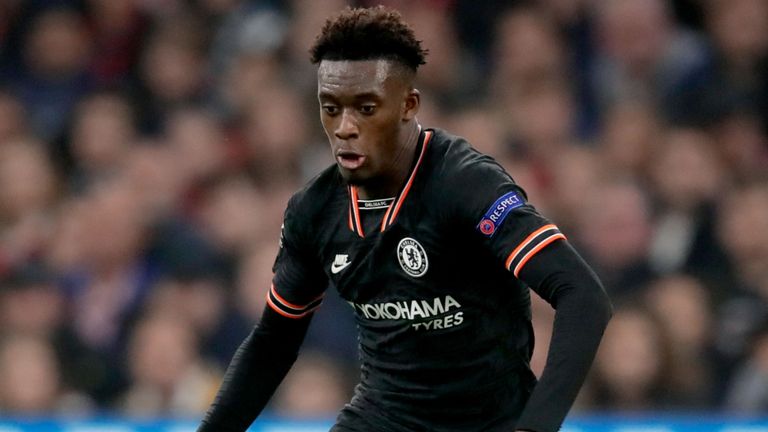 The wonderkid didn’t have it all his own way in the midweek Champions League clash but the Blues boss thinks it will be a learning experience
Frank Lampard has called on Callum Hudson-Odoi to stay humble despite his vast potential and to learn from the likes of himself, Jorginho and even Raheem Sterling while away with England on international duty.

The Blues boss was instrumental in getting Hudson-Odoi to remain at Stamford Bridge as Bayern Munich tried to sign the 18-year-old with his previous contract expiring at the end of this season.

Hudson-Odoi worked hard in Chelsea’s 1-0 away win in Ajax but he wasn’t quite at his best as the Blues got the win on the back of a brilliant defensive display. Lampard has been clear in saying that his new £180,000-a-week contract means that the ‘hard work starts now’ and he is now calling on him to pick the right role models to develop.

“The minute I took the job I made contact with Callum because I knew his contract situation and I felt it was a big sign to him that he should stay, absolutely the right decision for him and the club, and the club were trying to make it happen so, as the manager, I got involved there,” Lampard told reporters at Cobham Training Centre.

“Since he has come back on the pitch, I’ve been saying, sometimes speaking to the outside world, that he can do better because I feel like he is a player who will react well to those because I only want the best for him.

“I don’t like to mention other players but I think Raheem Sterling is such a good role model for a young English player in roughly the same position to see the development and for me that is hard work behind the scenes that Raheem has brought into his game in all senses.

“And I want that from Callum and that starts with what he does day-in, day-out in every bit of training cannot be lost on him. He has to get every ounce out of it and listen to me and listen to the staff. And his teammates because that will drive him as well.

“Jorginho plays like that, so it is all good at the minute and I hope his development keeps going at the rate it is. I don’t want to sound like I’m being ultra-firm with him day-in, day-out. I was the first to congratulate him against Newcastle, particularly when he ran back to tackle their full back in the corner with a recovery run.

“But there are moments with all the younger players when they need to hear the cruel reality of football because it is only being on edge consistently will bring them the big celebratory moments they will get when things all go well.”

Chelsea now moves onto face Burnley away as they look to add to their impressive run of form that has seen them win six games in a row.

The run sees the club in the top four of the Premier League and leading Group H in the Champions League. Lampard’s management style will increasingly come under focus amid the success after joining his former club in the summer.

He insists that he doesn’t play good cop, bad cop with his coaching staff, which includes Jody Morris as his assistant manager, but admits that it is down to him to tell off his players.

“No it doesn’t work like that and it’s important. I wouldn’t want the players to think that is some form of a double act in that sense. We can both have our moments and Joe Edwards and Chris Jones,” he added.

“We are a very tight-knit bunch and sometimes if you try to be the good cop as a manager consistently I’m not sure that’s the right tone. Sometimes a strong message comes out even if it is not nice to be heard for the group or a player it must come from the manager in my opinion so unfortunately, I have to be bad cop sometimes.

“I’ve had a couple of words occasionally but I’m not a manager that is full of rollockings as such. I like to have a message that is pretty clear over a period of time that I try and drive home and certainly if I ever felt there was a lack of effort in training or in-game then that would be the moment that I would go towards that but certainly the players are trying to take on messages in terms of when we are on the ball and stuff.

“That is not rollickings that is my job to keep enforcing it until we get it right. I think it depends on the player and the group and if there is a moment where you have to be very firm that might be seen or spoken about as a rollicking I think it should be given but you only do it if you want to get the right result from it so that’s what I mean.

“Regular rollickings become white noise and not a positive one but if you have found a moment where things were not right and you felt it was relating to the game, i come back to a lack of effort or application you should give that and see what result you get from it.”