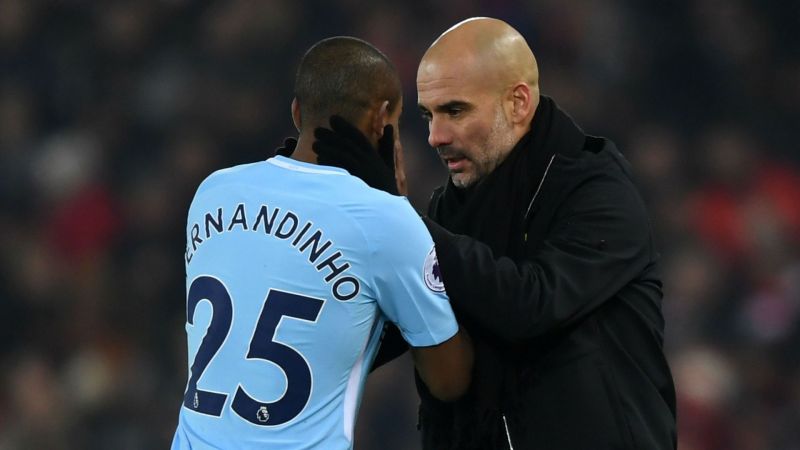 The Manchester City boss claims he prefers the Brazilian in a centre-back role at the moment, with Rodri and Gundogan covering in holding midfield
Pep Guardiola says he prefers Fernandinho playing at centre-back with Aymeric Laporte still out injured, discarding former first-choice pairing John Stones and Nicolas Otamendi.

Guardiola’s decision not to bring in a replacement for Vincent Kompany when the Belgian re-joined Anderlecht at the start of the season came back to haunt him when Laporte was struck down at the end of August.

The Frenchman suffered a serious knee injury in a 4-0 home win over Brighton and is not expected back until well into the new year.

City have looked far more vulnerable at the back without Laporte, slipping 11 points behind runaway Premier League leaders Liverpool after 14 fixtures.

Despite the fact that Stones and Otamendi were ever-present during City’s 2017-18 title success, Guardiola has opted to shift Fernandinho back into the defence while he waits for a key performer to return.

The Brazilian has featured alongside Stones more often than not, with Otamendi restricted to just seven Premier League starts in total so far this season.

Ahead of City’s crucial trip to Burnley on Tuesday night, Guardiola was in a prickly mood when being quizzed on his selection policy at a press conference.

The exchange began when a reporter asked why he hasn’t been playing Stones and Otamendi together, to which he responded: “Because I like Dino [Fernandinho] in that position.

On if he has been happy with Fernandinho’s performances in defence despite the fact he has been a midfielder by trade throughout his career, Guardiola added: “Have you seen the games?

“I prefer Gundogan and Rodri in this position [midfield].”

The Spanish boss went on to express his belief that wasteful finishing has been his side’s main issue in recent weeks, most notably during a 2-2 draw against Newcastle at St James’ Park on Saturday.

“We have 26 shots against Newcastle and they scored two goals,” Guardiola said. “To do that away is incredible.

“We always try to create more and concede less. We did it again but unfortunately, we couldn’t win.”

City cannot afford to lose any more ground on Liverpool as they pursue a third successive Premier League crown, with Manchester United set to arrive at Etihad Stadium four days after their clash at Burnley.

Guardiola says it is pointless for his team to worry about the gap at the top of the table, placing a focus on taking each game as it comes in order to stay in the title picture for as long as possible.

“It’s good they believe it [that the race is still on]. They have to believe to win tomorrow,” he said.

“We can’t think too much about the people in front. We have to think about what we need to do to win the games.”