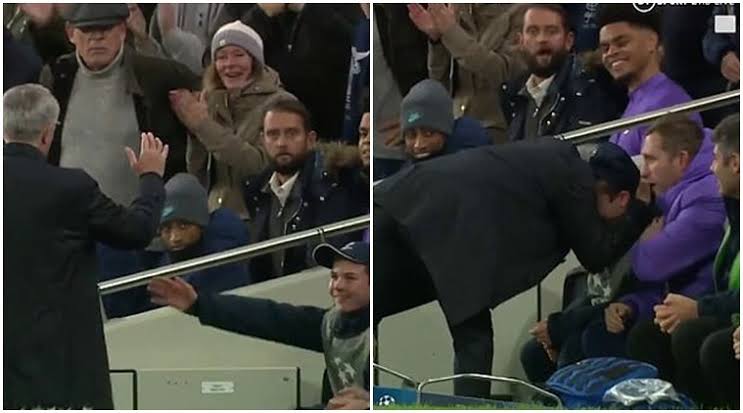 After going 2-0 down at home, Spurs benefitted from some help from a ballboy as they pulled off a memorable comeback

New Tottenham manager Jose Mourinho has praised the work of an ‘intelligent ball boy’ that proved key in his side’s 4-2 win over Olympiacos in the Champions League on Tuesday.

Trailing 2-0 after 20 minutes, Spurs pegged one goal back just before half-time through Dele Alli and found their equaliser early in the second half courtesy of some quick thinking on the sidelines.
As Mourinho’s side charged forward, Serge Aurier was able to take a quick throw-in courtesy of a ball boy, with Lucas Moura receiving the ball, racing into the box and setting up Harry Kane for a routine finish.

Tottenham wouldn’t look back after the equaliser, scoring twice more to secure their spot in the Champions League knockout stages, with Mourinho heaping praise upon the ball boy that helped decide the game.
“I love intelligent ball boys like I was, and this kid today was brilliant,” Mourinho told BT Sport post-match. “He read the game, understands the game and made an important assist, an important moment for him and he will never forget it.

“The goal before half-time is important. I did not see it, I saw it later on the screen.
“When you are losing 2-0, if you are in control of the other result and you know a draw is enough to qualify then we can go for the draw in the second half and be pragmatic.”

Mourinho was seen congratulating the ball boy after Kane’s equaliser with former Spurs manager Tim Sherwood also joking that a contract could now be awaiting him.

2,780 people are talking about this
“Look at the ball boy, outstanding! The distribution – unbelievable,” Sherwood said on beIN Sports .
“He will be signed in the morning that kid. That boy is probably from the academy…gets an opportunity and look at the pace of him to get that ball back.
“If I’m the Olympiacos coach, I’m strangling him after.”
After struggling for form under previous manager Mauricio Pochettino, who was replaced by Mourinho last week, Tottenham have now won two games on the bounce.
While disappointed to see his side fall behind early on, Mourinho praised the players for remaining calm and securing their progression in the competition.
Mourinho leads Tottenham training ahead of Champions League return
“We have qualified for the next round, that is the important thing for all of us at the club and the fans,” he said.

“It was hard, they are a good team, very well organised and they attacked our self esteem and self confidence.
“I did not expert our boys to feel this pressure at home and they have not had the best results in the last few months. It was a tough time, more than the changes or the tactical talk, I told them to keep calm, keep confident and believe in ourselves.”