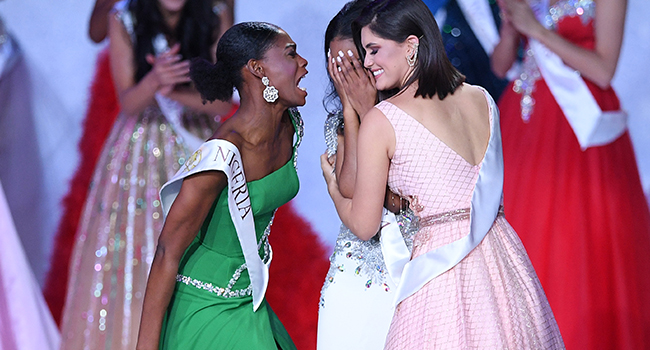 Last December, the Most Beautiful Girl in Nigeria, Nyekachi Douglas stole the headlines with her wild celebrations when Miss Jamaica was announced the world’s most beautiful woman at the Miss World 2019 beauty pageant.

Although Douglas, who was the highest-ranked African beauty queen at the contest, didn’t win, she received warm accolades for the manner in which she jubilated with Miss Jamaica, Toni-Ann Singh.

Recently, the Jamaican Consulate in Abuja invited Douglas to congratulate her for placing high at the beauty tournament and, of course, for her bubbling celebrations around the Jamaican queen.

“From the moment you graced the stage in London at the Miss World, we thought that you had something special and certainly by the time the competition was over, we had confirmed that,” Jamaica’s High Commissioner to Nigeria, Esmond Reid, said at the Jamaican reception for Douglas.

The top diplomat also announced that Douglas was set to travel to Jamaica in February.

“We know that an invitation has been extended for you to come to Jamaica in March and all of Jamaica is waiting for you,” he said.

“You are one of us now. And it is no accident that you have the surname Douglas, which is a very recognised name in Jamaica. We look forward to seeing and reading about the things that you will be doing.”

At the reception, Douglas was visibly overcome with emotion, intermittently covering her face with her palms.

“The first time I watched the video (celebrating on the Miss World stage), I was like ‘why did I have to be so excited on stage?’” She said.

“We should be happy that someone has gotten to a place where they can do what you want to do. And as Toni-Ann said, there is enough room for each of the other Queens to still make a difference. The crown is beautiful, but you don’t need the crown to change the things that you can change. And Toni-Ann is an amazing woman, a God-fearing girl, someone that I can say I admire – she has values. So I am not surprised that she has the crown. I called it. So I was like ‘I told you’.”

Later during the reception, Douglas shared the story of how she decided to compete for the Most Beautiful Girl in Nigeria (MBGN) contest which catapulted her to the world stage.

“It was something that I had always wanted to do,” she said.

But at the audition stage, “I had so many reasons to believe I wasn’t going to make it too far. But the push from the people that love me and God gave me the courage to still go there, even though I thought I didn’t have the nicest clothes.

“Even after the auditions, there were moments I felt I wasn’t going to go anymore because I didn’t want to waste my time. I wanted to come back the next year when I had better clothes. But now I realise you will never feel fully prepared. There is always something more that you can do; and if you keep on waiting, you are never going to do it because there is no such thing as perfect.”

Douglas said being at the Miss World contest has shown her that beauty pageants are not about “how beautiful you are or how slim your waist is, it is more about how do I be an impact on the rest of the world? It’s more about being a voice – not just for yourself but for your country.  It’s a union of national ambassadors. And we are finding ways we can make ourselves better and make our projects better. It is something that will change you completely and make you see life through a different lens.

“I grew up in a place that’s not as privileged,” she said. “It’s very difficult to be ambitious when you are living in that kind of place because you are only seeing one thing and my goal is to expose them to more than what they have.”