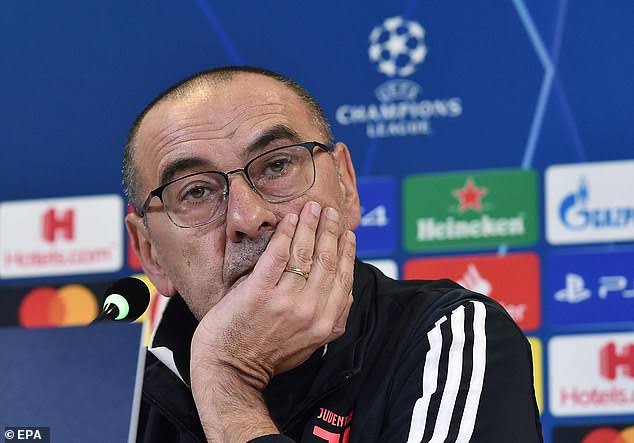 Juventus coach Maurizio Sarri claimed he has been ostracised as a ‘Taliban’ by critics for wanting to play his own style of football.
The Italian tactician’s attacking brand of football, which has been dubbed ‘Sarriball’ by the media, was highly popular while he was at Napoli between 2015-18, as he led the Serie A club to two second-place finishes.

Sarri has veered away from his familar style since joining Juve in the summer to fit in attacking players such as Cristiano Ronaldo, Gonzalo Higuain and Paulo Dybala into the team.

However, despite going unbeaten with the Serie A champions so far, he believes that he can’t keep critics happy no matter his side plays, jokingly suggesting he was seen as a member of Islamic fundamentalist group ‘The Taliban’.
“I was defined as a Taliban because I always wanted to play my football, now it’s not good enough because I adapt to the different characteristics of my players,” Sarri said in a pre-match press conference prior to the Old Lady’s Champions League match against Atletico Madrid.
“If I had to listen to or read the things that are said about Juventus, I would go crazy. I just get on with my work.
“I would like to see the most consistent team and certain attitudes, but we must take into consideration the different characteristics of our players.”
Sarri’s impressive efforts in Naples helped earn a move to Premier League side Chelsea last season, but the 60-year-old was criticised for relentlessly trying to play his style of football, with decisions such as implementing N’Golo Kante further forward and persisting with Jorginho in a deep role widely questioned.
With his time in London not working out as planned, Sarri was hired by Juve for this season after Massimiliano Allegri decided to step down – and despite going unbeaten to win 14 of his first 17 games in charge, critics are still circling the club that has won eight consecutive league titles.
Sarri, however, is confident that his team will continue to get better during his reign and he vowed to continue to play to the strengths of his players.

“We will improve in many aspects, but you can’t go for your personal taste and against the characters you already have,” he said.
Higuain not looking to dethrone Ronaldo at Juventus
“The team must be accompanied by implementing ideas, and we have real room for improvement.
“Right now, we are only showing flashes of what we feel we can achieve and we would like to show them more consistently.
“The margins are wide, and we will find them between the highs and lows.”