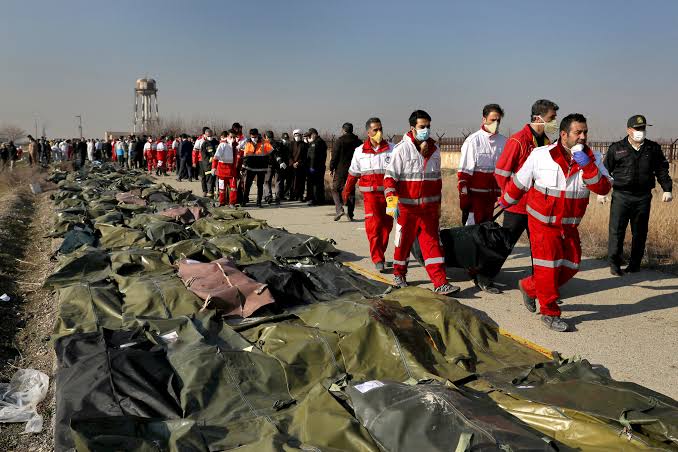 The general staff of Iran’s armed forces says that Ukraine International Airlines Flight 752, which crashed just after taking off from Tehran’s airport on January 8, was brought down due to human error, according to state-run Press TV.

US officials previously said they thought the plane had been shot down with two Russian-made surface-to-air missiles, likely by accident.

Iran’s President just released a statement on the crash
After sending a tweet Saturday morning acknowledging the Ukraine International Airlines flight that crashed this week was shot down, Iran President Hassan Rouhani has released a lengthy statement, calling the incident a “terrible catastrophe.”

Read the statement below:

With the utmost regret and sorrow, hours ago I was informed of the outcome of the General Staff of the Armed Forces’ investigation into the Ukrainian passenger plane crash. In the atmosphere of threats and intimidation by the aggressive American regime against the Iranian nation after the martyrdom of General Qasem Soleimani, and in order to defend ourselves against possible attacks by the American Army, the Armed Forces of the Islamic Republic of Iran were on full alert, which unfortunately led to this terrible catastrophe taking the lives of dozens of innocent people because of human error and mistaken shooting.

The Islamic Republic of Iran is deeply sorry by this disastrous mistake, and I extend my deepest condolences to the families of the victims of this tragic incident on behalf of the Islamic Republic of Iran, and instruct all related organs to take all necessary measures to compensate and sympathise with the bereaved families. I also express my deep condolences and sympathy of the Iranian government to the nations, governments and families of non-Iranian victims. The Ministry of Foreign Affairs will be in full consular cooperation to identify and return the bodies of victims to their families.

This painful accident is not something that can be easily overlooked. Further investigation is needed to identify all the causes and roots of this tragedy and prosecute the perpetrators of this unforgivable mistake and inform the honourable people of Iran and the families of the victims about it.

It is also necessary to adopt the required arrangements and measures to address the weaknesses of the country’s defence systems to make sure such a disaster is never repeated.

Again, I extend my condolences to the families of the victims of this painful accident, praying for those who lost their lives and wishing their bereaved families patience and rewards.