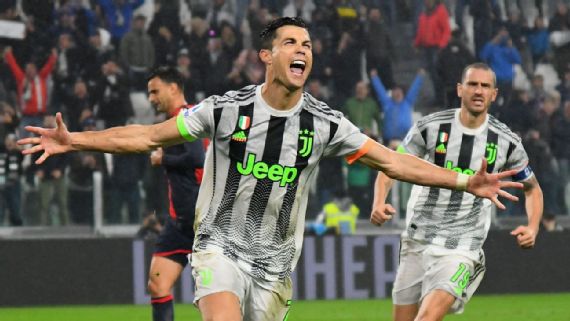 The Old Lady left it late to claim all three points in an entertaining clash, leaving their Portuguese star pleased with the team’s resilience
Cristiano Ronaldo was delighted with the way Juventus kept persisting in a nervy 2-1 win against Serie A strugglers Genoa on Wednesday.

Both sides ended with 10 men and it looked like they would share a point after Christian Kouame’s bizarre goal cancelled out Leonardo Bonucci’s opener in Turin.

Genoa’s Kouame shot the ball with his right foot into his trailing left leg, producing a wicked deflection that wrong-footed Juve goalkeeper Gianluigi Buffon and appeared as if it may earn Thiago Motta’s side a draw.
Ronaldo had a 92nd-minute goal disallowed after VAR ruled he was offside, but he still had time to be the hero, winning and then scoring a controversial late penalty.

“[It was] a very difficult match against an organised team but we are Juventus, the motto is to [fight to] the end.

“We are very happy with the three points. We created a lot and we deserved it.

“Inter ahead in the standings was an extra stimulus.”

Genoa had to play more than 40 minutes with 10 men after Francesco Cassata was given his marching orders in the 51st minute for another foul on Paulo Dybala.

Both of Cassata’s yellow cards came for challenges on Dybala.

Referee Antonio Giua levelled things up at the Allianz Stadium in the 87th minute, when Juventus substitute Adrien Rabiot was given a second yellow card after a rough tackle on Gunius.

Many sides would have sat back and taken a point from there, but Juve kept persisting as Ronaldo produced a typical dose of late drama.

The Portuguese international, was frustrated by a VAR decision seconds earlier, then fired in the penalty in the sixth minute of stoppage time.

“We suffered a lot but we were the rightful winners. We created so many chances and deserved this win,” said Ronaldo.

“We got a bit anxious as the game went because we needed the win but we kept on trying until the end.”