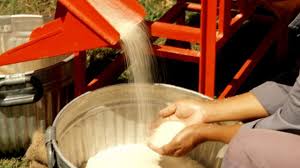 Kano State Governor, Dr Abdullahi Ganduje, says that the local production of rice in the state has reached three million tonnes per year.

He said this on Monday in Kano during the indigenous rice value-chain promotion programme organised by the Rice Farmers Association of Nigeria.

The governor, who attributed the steady progress made in rice production to the state government’s agricultural policies, noted that these had impacted positively on farmers’ production capacity.

“Today, I am proud to state that due to the activities and policies of this administration towards agriculture, rice production in Kano has hit three million tonnes per year,” he said.

According to a statement issued by the Deputy Governor’s Chief Press Secretary, Hassan Fagge, the governor was represented at the event by his Deputy, Dr Nasiru Gawuna.