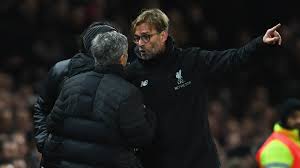 Liverpool manager Jurgen Klopp gave a hilarious response when asked who was the better player, he or Tottenham boss Jose Mourinho.
The two men are famous for having risen through the coaching ranks to the very pinnacle of the game, despite boasting comparatively little playing experience at the highest level.
Mourinho played a handful of matches in the 1980s with the likes of Rio Ave and Belenenses, while Klopp turned out over 300 times of Mainz in an 11-year career that was spent in the 2.Bundesliga.

It has been in the dugout, however, that both men have excelled, Mourinho leading Porto and Inter to Champions League success in 2004 and 2010 respectively, while Klopp reached a similar height with Liverpool last June.
The pair will lock horns in their new roles over the weekend, with Mourinho’s Tottenham playing host to the Reds in a Premier League encounter.
It was with some puzzlement, though, that Klopp fielded a pre-match question from a reporter over the pair’s respective prowess on the field and, more specifically, who was the superior player.
“Does anyone know what position Mourinho played? Don’t blame me if you don’t know it,” Klopp said.
“Does anybody know? I think he was a goalkeeper…
“I want to know now. Come on, Google it. We have time.”
After he was told there was no time, the former Dortmund boss retorted: “I have time!”
A quick Google showed that Mourinho was a midfielder, with Klopp coyly replying: “Sorry, Jose! He did play in goal in that charity game, though, so…”
While Mourinho was indeed a midfielder, Klopp had a more varied playing career, spending time initially up front before rapidly moving back to become a defender, where he featured most often as a right-back.
Klopp, meanwhile, will have his mind focused very much on the present day at Tottenham Hotspur Stadium as his Liverpool side aim to maintain their healthy 13-point advantage at the summit of the Premier League with a game in hand.
The Reds have made an astonishing start to the season, securing 19 wins from their opening 20 fixtures of the season and going more than a year undefeated in the competition.