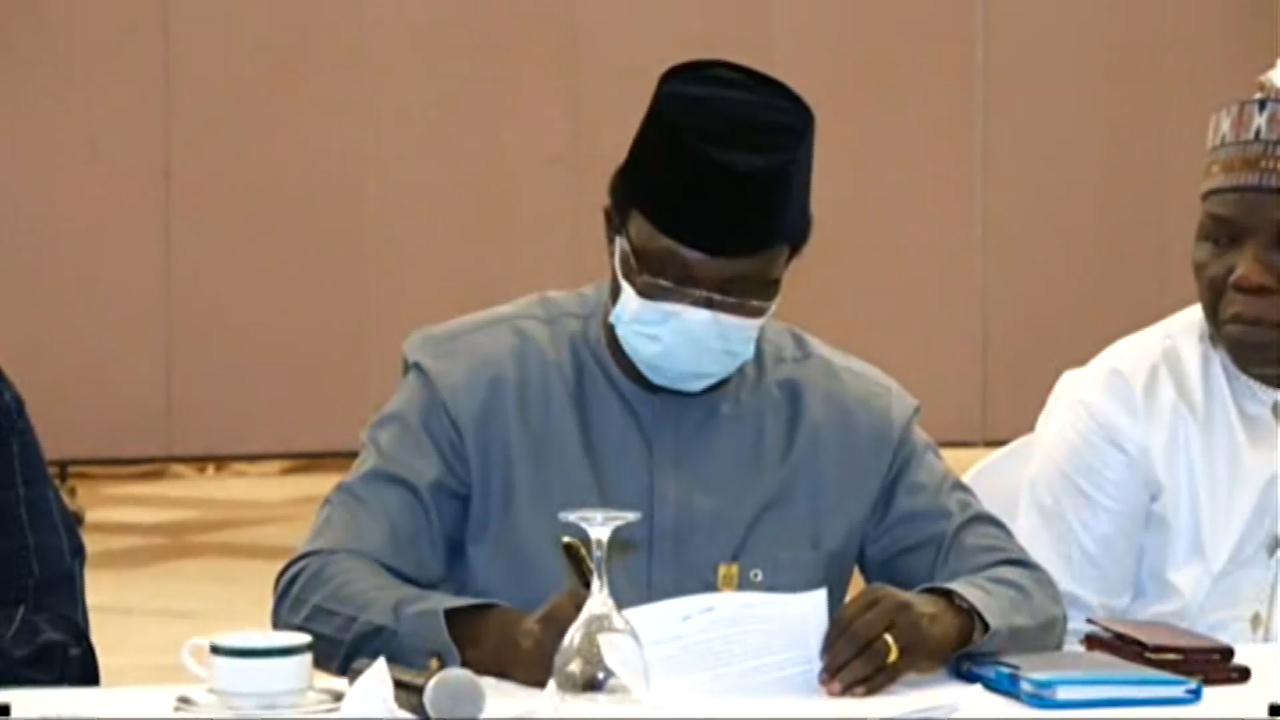 The organised labour has suspended its strike scheduled for today (Monday) after a meeting between labour leaders and the Federal Government.

This was contained in a communique read by the Minister of Labour and Employment, Dr Chris Ngige, after a technical session that started late on Sunday and lasted till the early hours of Monday morning.

The decision to suspend the strike followed an agreement reached between both parties and averts a nationwide strike which would have grounded economic activities in the country.

Organized labour, however, stressed that the strike was suspended not called off and it could be recalled if the government doesn’t hold up its end of the deal made at this meeting in the next two weeks.

As part of the agreement, the Federal Government will suspend the electricity price tariff hike and has set up a committee to look into what the labour minister described as conflicting field reports justifying the hike in electricity tariff.

The suspension of the electricity tariff hike will be for a two-week period during which the committee will conduct its investigations and submit its report.

The committee is to be headed by Dr Ngige, but he will be represented by the Minister of State for Labour, Mr Festus Keyamo.

Based on the agreement, the new price of fuel will, however, remain in place but the government promised to do more to improve local refining capacity, rehabilitate Nigeria’s refineries and pursue the CNG alternative aggressively by for instance providing CNG mass transit buses across the country.

Dr Ngige decried the stifled growth in Nigeria’s downstream sector and the dire circumstances faced by the government which he claims is the justification for fuel subsidy removal.

Below is a communique containing the agreements reached the meeting which began by 7 pm on Sunday and lasted till the early hours of Monday, September 28.

On his part, the NLC President, Ayuba Wabba welcomed the dialogue with the government and the resolutions reached.

He confirmed that the planned strike has been suspended and is looking forward to the palliatives promised by the government to Nigerians during the meeting.

The palliatives are meant to cushion the effect of the fuel price increase.

Sunday’s meeting was held in the banquet hall of State House in Abuja.

The minister of State for Power Mr Jeddy Agba was also in attendance.

The Nigeria Labour Congress (NLC) had on Sunday insisted that it will carry on with its proposed strike action, arguing that the increase in electricity tariff and removal of petrol subsidy is bringing hardship on Nigerians.

This resolve was taken following a closed-door meeting between the NLC and the Speaker of the House of Representatives, Mr Femi Gbajabiamila.

Mr Gbajabiamila had met with representatives of Organised Labour at the National Assembly Complex in Abuja, in an attempt to mediate and broker an amicable solution to the impasse between Organised Labour and the Federal Government (FG).

Briefing journalists after the meeting, NLC President Comrade Ayuba Wabba said the proposed strike by the union will proceed unless the FG addresses the issues.

Reacting to the court order restraining the NLC from downing tools, Mr Wabba said the organization has not been served with the order and cannot speak on it.

He, however, noted that there is a judgement of a Federal High court stopping the increase of electricity tariff which the FG has refused to obey.

According to the NLC President, the proposed strike would only fail to hold if the govt makes a u-turn before 12 midnight on Sunday.

At the brief before the closed-door meeting on Sunday, Mr Gbajabiamila said Labour cannot go on a strike in good conscience as the consequences will be dire on Nigerians who will feel the hardship caused by the industrial action.

He stated that the House of Representatives shares the same thoughts and philosophy with the NLC as regards the plight of workers and the House of Reps championed the cause of free electricity and had advised that the hike in tariff be put in effect from 2021.

Nevertheless, the Speaker said he worries about the consequences of the strike and what will be achieved at the end.

Do not join Labour strike

On Saturday, September 26, the Federal Government warned civil servants against participating in the planned nationwide strike called by the organised Labour.

In a statement, the Head of Service of the Federation, Dr Folasade Yemi-Esan, asked civil servants to be at work, saying the government is engaging with the union officials over the issue.

“Accordingly, all officers on grade level 12 and above and those on essential services are hereby strongly advised to be at work to perform their official duties.

“Permanent Secretaries and Chief Executive Officers are, therefore, enjoined to bring the contents of this circular to the attention of all concerned officers and ensure strict compliance,” the statement partly read.

This communique comes a day after the FG obtained a fresh order barring the Nigeria Labour Congress and the Trade Union Congress from embarking on their planned strike scheduled to commence on Monday.

Justice Ibrahim Galadima of the National Industrial Court sitting in Abuja issued the restraining order following an ex-parte application by the office of the Attorney-General of the Federation.

Though a court order was granted against its industrial action, the NLC went on to ask its members across the nation to come out in large numbers to protest.

In a communique by its General Secretary, Comrade Emmanuel Ugboaja, the NLC asked all National Leadership of affiliates in Abuja to mobilise at least 2000 of their members to Unity Fountain, Abuja for the mass rally which takes off at 7am.

Also, affiliates are expected to mobilise the same number of members to the NLC Sub-Secretariat, 29, Olajuwon Street, Yaba, Lagos, which is the take-off point for the Lagos action at 7 am also.

Ahead of the threat by the NLC to resort to an industrial action to force the Federal Government to rescind its decision to hike oil and electricity prices in the country, the Nigeria Governors’ Forum (NGF) held an emergency meeting.

Arising from the meeting, the governors cautioned the NLC against the planned strike, arguing that any plan to down tools will worsen the currently deteriorating economic situation of the country occasioned by the COVID-19 pandemic.

Why threats of a strike?

The NLC’s threat to go on a strike is hinged on seven pertinent issues, including, the recent hike in fuel price, increase in electricity tariff, non-implementation of the N30,000 new minimum wage, alleged corruption in government agencies, loss of jobs across industries, high cost of living and, businesses not booming in the light of the effects of COVID-19.

In March 2020, Nigerians were somewhat elated when a crash in crude oil prices within the international market saw the pump price of Premium Motor Spirit (PMS) move from N145 to about N125 per litre.

There was more joy when in May, the Petroleum Products Pricing Regulatory Agency (PPPRA) announced a new pump price band to between N121.50 to N123.50 per litre for petrol.

However, this joy was shortlived as towards the end of May and tapering into September, the price for fuel began to rise drastically until it ended up becoming 151.56 Naira per litre, though there are several reports that Nigerians are in various states are paying as much as 161 Naira per litre.

In a similar vein, Nigerians in September began to pay new electricity tariffs with more than a hundred per cent increase.

The Nigerian Electricity Regulatory Commission (NERC) suddenly increased electricity tariff from 30.23 Naira for one kwh (kilowatt unit of energy per hour) to as much as 62.33 Naira per kwh.

NERC said the new electricity charges ‘Service Reflective Tariff’ would work in such a way that people pay more for the more hours they enjoy power supply.

According to the regulatory body, with this new tariff plan, people who use light for 12 hours and above get to pay between 80% and over 100% more but the increase will not affect the poor who use light for fewer hours.

It is with regards to these new policies and other pressing economic issues that the NLC threatened to carry out a nationwide strike.

The government, however, says that the recent increase in electricity and fuel prices will benefit ordinary Nigerians in the long-run.

The Minister of Information, Lai Mohammed, argues that despite the increase, Nigerians still pay less for fuel, compared to neighbouring countries.