At 8:00 a.m. on the 7th of December 2020, the main line of the Lagos-Ibadan railway, the first double-track standard gauge modern railway in West Africa, commenced trial operations with passengers. On the same day, the acceptance process started on the main line of the railway. 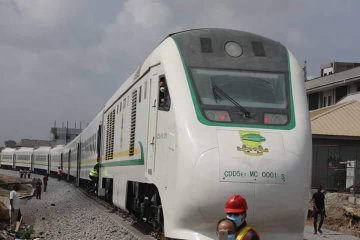 The trial operation was conducted by a China-made Diesel Multiple Unit (DMU), which runs two times a day and opens three stations at the early stage. The train has a standard capacity of 588 passengers, with a limited passenger density of not more than 3/5, in accordance with the Nigerian government’s pandemic prevention and control requirements. 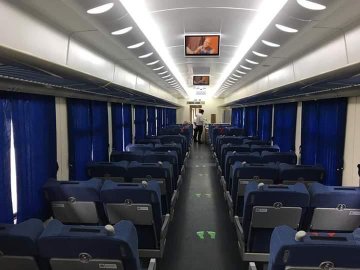 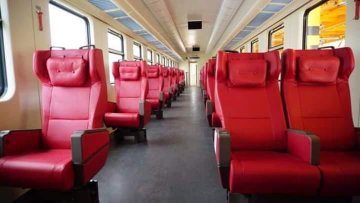 At present, the train runs 2 hours and 40 minutes, and the running time between Lagos and Ibadan will be shortened to 2 hours after the official opening.The project is now being pushed ahead with the construction of the rest of the work, and all the personnel are working around-the-clock with high morale towards its official operation in 2021.

The project started on March 7, 2017 when Vice President Professor Yemi Osinbajo broke ground on the standard gauge #LagosIbadanRail line, on behalf of President @MBuhari. Almost four years, December 7, 2020, the Line commenced commercial operations, ahead of formal commissioning in Q1 2021. This would be the first time in Nigeria history that such project was achieved within four years.

Different reactions from Nigerians who were filled with joy have been trending online.

#LagosIbadanRail project started in 2017, now in operation and to be commissioned before the end of March 2021. It means it took less than 4 years for @MBuhari and @ProfOsinbajo team to get this done and delivered to Nigeria.
Congratulations Nigeria, it is ours, we'll use it!?? pic.twitter.com/cA7ZXfa6AQ

How’s this not exciting? Extra feeling for me because I was there the day construction kicked off, have followed it closely since then, and travelled the line a couple of times during construction.

The First passenger showed his ticket which cost him N2,500:

PHOTO OF THE DAY

Ogunfeyintimi Abayomi became the first Lagos-Ibadan Train Service's (LITS) customer yesterday by arriving at Moniya in Ibadan before 8am to board a train to Ebutte-Meta in Lagos, after paying N2,500 Congratulations! @deleyewilliams @Official_NRC #LagosIbadanRail pic.twitter.com/NdRzN7L2U0

The video of the train as shared on twitter:

The journey from Lagos to Oyo on the Lagos-Ibadan Railway. People can live in affordable dwellings in Ibadan and work in Lagos pic.twitter.com/UrvyV9pIQx

Reaction from the Presidency online: