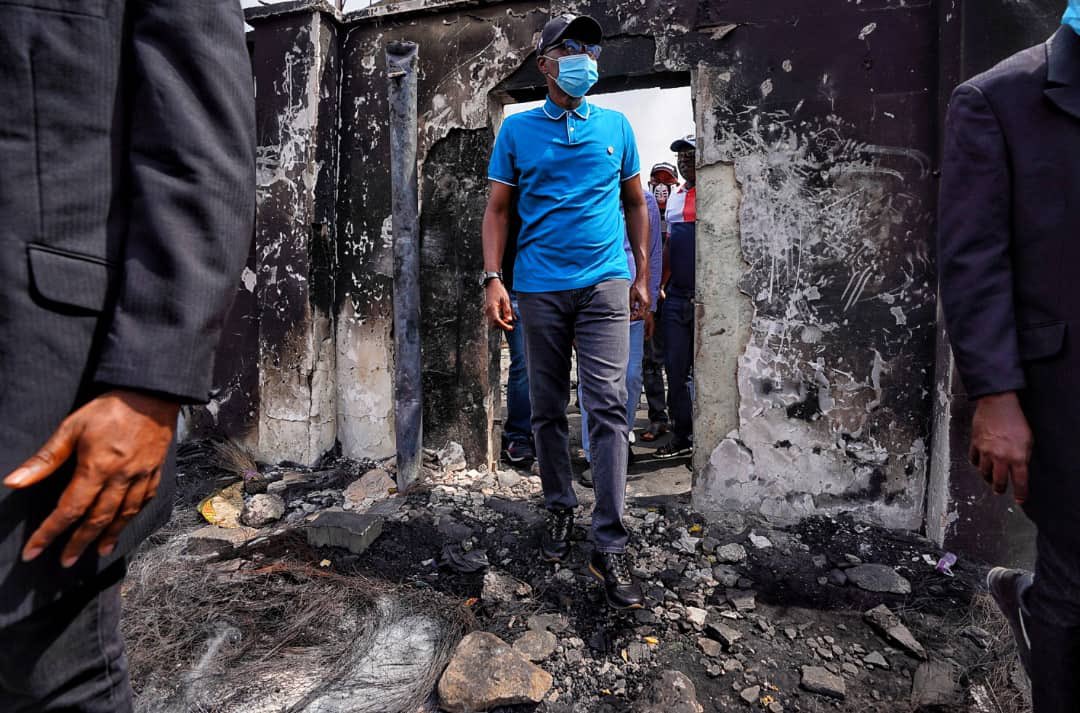 They have the documentary of how Lagos was attacked by terrorists on the 21st of October 2020 in a well coordinated way, they’re only hiding it for now from the world. @CNN operating ILLEGALLY in Nigeria is keeping this away from their viewers worldwide.

Giving the breakdown of the Economic cost of the SORO SOKE EndSARS protest at Lagos Business School, the loss was estimated way above $12 billion, please click HERE to view and download details. The entire economy of Rwanda as a Nation is less than what we lost in two weeks of the protest.
This terrorist attack was well coordinated especially by CELEBRITIES who rose to stardom because Lagos environment was conducive for their industry, the same Lagos they almost destroyed.

The International Media platform @CNN used their go-between folks like @StephanieBusari @nimaelbagir and @IshaSesay to coordinate this terrorist attack in Nigeria, specifically using Lagos being the Economic Capital to bring crisis. @BBCAfrica was complacent and complicit also.

The main leading voices of the protest were sending support to the same people they tagged “government sponsored thugs & area boys” during #EndSARS because HOODLUMS were “holding it down” for them.
Don’t you like the difference between peaceful protesters and Government Sponsored hoodlums?
Why DELETING?

If you Insist this was not a well coordinated terrorist attacks, there are questions asked by my friend Dr Tokunbo known as @fimiletoks on twitter, Please answer them LIVE on @CNN @BBCAfrica or any other local stations.
1. Tell us the end game for the protest when all their demands were met.
Was SARS dissolved AS AT 11th October 2020? How about #5For5 demands? The answer is obvious.

2. If the plan was not to throw the country into chaos and effect a regime change why keeping the protest on especially in Lagos, when everything they asked for was done?
3. What was supposed to bring an end to their protest?

4. What would have made you guys leave the road? 5. Why did you remain outside & in ONE PARTICULAR SPOT for 4 hours after the curfew was declared at about 11:49am on 20th Oct?
6. Why didn’t you leave even after the governor addressed YOU twice and you saw trouble brewing after police stations were burnt and @PoliceNG lynched in Lagos?

So, to get this Lagos terrorist attack in motion unhindered, the first thing was to blackmail the @HQNigerianArmy & your DJ Switch, Godson etc were on ground while your celebrities online were also posting FAKE NEWS of those killed. They prepared free pass for the attacks… If @cnni wants to keep ds documentary of the terrorist attack they coordinated in Lagos away, we’ll bring it to the fore. The crisis was meant to enforce regime change, create crisis like Libya, turn Nigeria into a war zone..
“Peaceful protesters” started at @jidesanwoolu place.

The Lagos State DNA and Forensic Laboratory centre located at CMS, Lagos Island was attacked. It wasn’t an afterthought, they knew exactly where to attack.
The First DNA Forensic Lab In West Africa was Unveiled In Lagos State in 2017….@CNN was in the game, @StephanieBusari

The Lagos High Court, Lagos Island was attacked by terrorists. @CNN should show this to their audience.
Did “peaceful protesters” online give directives that Lagos must be burnt down? YES, they peacefully did that.

Ajeromi Ifelodun LGA was attacked by terrorists. If you have any other name for them from your Whatsapp group, we won’t stop you from using that.

Ebute Ero Police Station, Lagos Island was brought down, weapons carted away…..December promo for criminals was set in place on the 21st of October by “peaceful protesters”…

Nigeria Port Authority HQ, Marina Lagos was targeted. Can anyone link “SARS” to NPA building here? Well, ask those whose hands were removed from the cookie jar of NPA….

Oyingbo Bus Terminal with BRT Buses that SanwoOlu and Tinubu’s children were using were all brought down by terrorists on the 21st of October.

Ajegunle Apapa Police Station was brought down by those who planned everything behind the scene.

BRT Buses at Ojodu Berger was burnt down by arsonists.
@CNN and @BBCWorld must take time to air it to their viewers. Remember to tell them Lagos is still standing and Nigeria will come out this coordinated attacks you’re involved in. Nigeria is not Libya.

Ajah Police Station was not spared and all these happened just in one day.

TVC was burnt down by the terrorists because they could link it to Tinubu on the 21st October. It seemed everyone was already in their locations, simultaneously carrying out this attack in Lagos.

Nigeria Port Authority was specifically targeted in Lagos. If you have any other State in Nigeria where all these happened, mention such. Question is, if the protest was about SARS & Police brutality, why targeting Lagos for destruction as though it happened in Lagos alone?

Did @cnni @StephanieBusari tell you that State High Court Igbosere, Lagos was set on fire? They didn’t just set Courts on fire, they went inside to tear case files. It was well planned and coordinated.
Did you read that from @BBCWorld at any time?
The plan was to set Nigeria ablaze like Libya, Iran etc…

Lagos Theater in Oregun was set on fire but @CNN has not made the documentary available with their TECHNOLOGY. yes, that’s what they wanted to see in Nigeria….

The Nation Newspaper office was set ablaze in Lagos that same day. What happened in Lagos within 12 hours would have brought many African Nations to their knees. @CNN failed on this mission, your celebrities by now should have finished what they collected to set Lagos ablaze.

Kiki Mordi & others were on ground to coordinate the events that eventually led to this act of terrorism in Lagos. At what point did they plan to stop?
Any UPDATE from other State Judicial panels?
Did you DONATE for this attack also?

On the 12th October, @kikimordi flew this kite of blocking Lagos-Ibadan Express that led to raping, robbing, looting, loss of agricultural goods around that axis.
If I lost my business around Berger to this nonsense, I will sue her & wait for online Hoodlums to meet me in court https://t.co/rPmgusTHyA pic.twitter.com/FxPTjSYHva