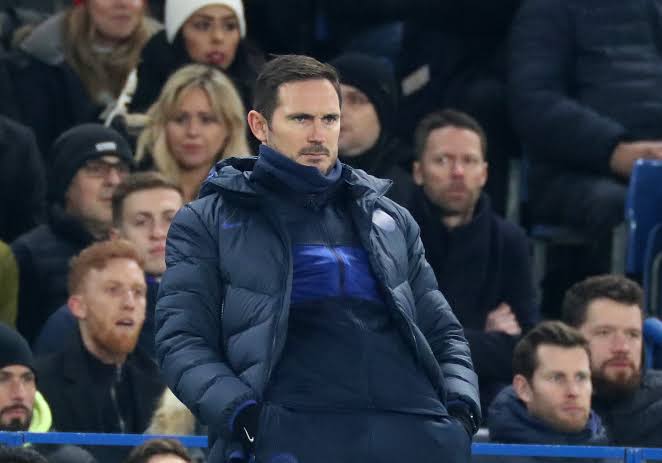 Frank Lampard feels Chelsea’s profligacy in front of goal has again cost the team three points as they only managed to draw 2-2 with 10-man Arsenal at Stamford Bridge on Tuesday.
Former Blues centre-half David Luiz was shown a red card midway through the first half, with Jorginho converting the resulting penalty to start what looked like a routine victory.
But despite the Gunners forcing an equaliser through Gabriel Martinelli, Chelsea again went ahead through Cesar Azplicueta’s close-range goal. However they were denied the win when Hector Bellerin’s curler snuck in at the far post on 87 minutes.

Lampard felt let down by his team’s performance against a depleted opponent and believes their lack of clinicality in attack has again cost the team points.
“I am disappointed given the situation of the game,” the Chelsea boss said to BT Sport. “We completely deserved to go 1-0 up.
“For a little bit after that we were getting used to them with 10 men.
“But we created enough chances in the second half, it was just the same old story – we couldn’t take them.
Lampard added to BBC Match of the Day: “We could have had three or four goals today. Having shots, crosses and lots of ‘ooh’ moments. We have to be clinical.
“When gameday comes you have to have the killer instinct. We’ve not got that at the moment. We might be a bit young and a bit of transition about us but we have to have that quality. It’s nothing on the crowd, that’s about us.”
Luiz was shown his marching orders in the 26th minute after bringing down Tammy Abraham after Shkodran Mustafi’s errant pass allowed the English striker to sprint through on goal.

Jorginho slotted the penalty cooly past Leno to give Chelsea the platform to go on win, but they couldn’t build on the advantage.
A slip by N’Golo Kante allowed Gunners teenager Martinelli to get through on goal and score but it still looked like the Blues would get all three points when Azpilicueta put Chelsea back into the lead six minutes from time.
But poor defensive coverage from Abraham three minutes later allowed Bellerin to cut inside and find the far corner with a low, curling strike.

The Chelsea manager was frustrated at the errors made by his team at the back, as they missed an opportunity to go eight points clear of fifth-placed Manchester United.
“We didn’t defend and gifted them two goals. That’s people not doing their jobs which they should know,” Lampard said.
“Moments like that lose you points at this level.”