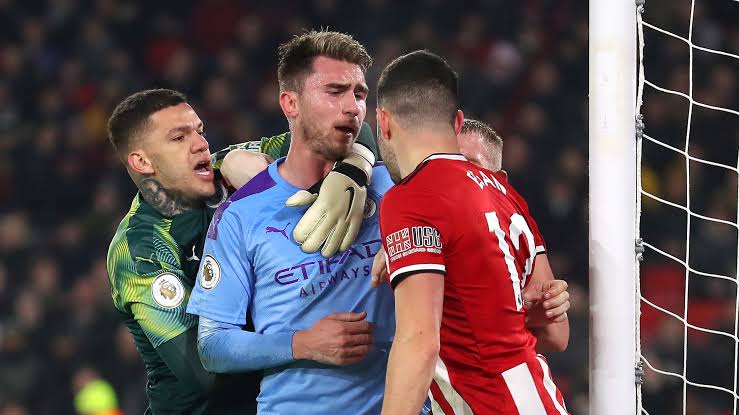 Aymeric Laporte made his long-awaited return from injury on Tuesday night and Manchester City suddenly looked like a different team.
The Premier League champions went from a side that couldn’t see out four minutes of injury time against Crystal Palace three days ago to a defensive unit that restricted Sheffield United to just a single attempt on target – a weak backheel into the arms of Ederson.
The 1-0 victory at Bramall Lane was City’s first clean sheet of 2020 and Pep Guardiola admitted that Laporte’s absence has been huge.

Kevin De Bruyne’s stunning pass set up Sergio Aguero’s winner, but City won the title last season without the brilliant Belgian for half their games.

Without Laporte since the end of August, this season’s challenge has collapsed. They have conceded 27 goals already – four more than the entirety of the 2018-19 campaign, and almost double the total of runaway leaders Liverpool.
“We have missed [Laporte] a lot; it’s incredible,” Guardiola admitted. “He’s the best left-central defender in the world. Imagine the best teams in the world losing their best central defender.”

The City boss warned before his return that Laporte wouldn’t instantly transform City’s defensive record but he was wrong.
There was an early sign of rustiness when the Frenchman made a misstep inside six minutes. Wrong-footed by a through-ball, he needed team-mate Fernandinho to tidy up the danger.
However, an early crunching tackle on George Baldock quickly snuffed out a hint of danger and a header from a corner underneath his crossbar under pressure cleared a serious threat.

There was a late chance that Ollie McBurnie was inches away from converting, as Laporte understandably tired shortly before he was withdrawn for the final 10 minutes.
By then, though, he had also shown that it is not only his defending that is crucial to Guardiola’s system. His passing and calmness from the back steadies the players around him.

Home fans howled the Blades attackers to put City’s defence under pressure and one press was broken up by Laporte with a simple, cool ball rolled across the six-yard box that led to a lightning quick counter-attack.
It’s why fans and team-mates were so fearful to see the Frenchman writhing around the floor after a crude Muhamed Besic tackle. Thankfully, Laporte was soon up and running again, much to the relief of his manager.
“He has something that we don’t have in the squad – his left foot and many actions that make [our play] quicker and better,” Guardiola added.
“We don’t have it without him, not because the other defenders are not good, but he has the only left foot as a central defender and for the way we want to play, that is so important.
Guardiola hails Laporte after impressive Man City return
“His character and mentality and winning – he has all the attributes.”
So often this season, City’s attack has bailed out a mistake from the defence. This time, the roles were reversed, with a clean sheet keeping City in a position to pick up three points even after Gabriel Jesus missed a golden chance from the penalty spot.
That’s why Laporte is so crucial and why his return could be a major factor in City’s pursuit of silverware in the final months of the season.