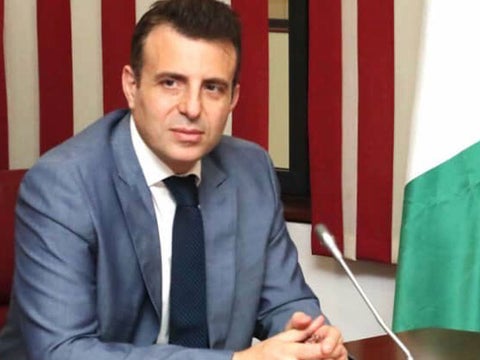 The Lebanese Embassy has suspended the issuance of working visas to Nigerians.

This decision was made following the video of a Nigerian lady auctioned by a non-Lebanese person via social media.

In a communique signed by Abdur-Rahman Balogun, the spokesman for the Nigerians in Diaspora Commission (NIDCOM), the decision is to checkmate the influx of some Nigerians to Lebanon to work, and complaints of maltreatment from some Nigerian domestic workers there.

Mr Houssam Diab, the Lebanese Ambassador to Nigeria said on Thursday that the Embassy has suspended issuing working visas to Nigerians seeking to work in Lebanon, particularly for domestic work.

He told the visiting Chairman/CEO of Nigerians in the Diaspora Commission (NIDCOM) Hon. Abike Dabiri-Erewa in his Abuja office that the mission suspended the issuance from May 1.

Amb. Diab stated that the suspension started since May 1, as a result of complaints of abuse by some employers, as well as the case of the video of Peace Busari, a Nigerian lady, auctioned for sale for $1000 on Social media in April this year, went viral.

He said the man who committed the act is not a Lebanese, but a Lebanese resident and has since been charged to court in Lebanon.

He said the suspension was to stem the tide for such categories of workers pending the time the procedure would be properly harmonized with the Ministry of Labour, in line with best practices of managed and orderly migration.

Thus far, the Ambassador said the Lebanese government in conjunction with the Lebanese community in Nigeria had brought back 69 out of 79 Nigerians allegedly stranded back to the country.

He explained that the remaining 10 Nigerians, who would be transported home soon after the Covid-19 lockdown, have some pending legal cases and would be repatriated home once they are through with their cases.

He clarified that the Embassy and the Lebanese community paid over $150,000 USD to evacuate the 69 Nigerians and also paid for their 14 days quarantine, adding that they were not in Lebanon illegally but were abused by their employers who also breached the working agreement and did not have money to bring them back.

He assured that the Lebanese government will not condone maltreatment of foreign nationals and anyone found guilty will face the necessary penalty.

Hon. Abike Dabiri-Erewa called on the Ambassador to ensure that whatever cases the 10 Nigerians left behind were being charged with, should be expeditiously dealt with so they can return home.

She said the Commission would work with the Ministry of Labour to have an effective and efficient t managed migration, a working scheme where verification and certification must be provided between agents, employers, and prospective employees that would protect the rights of workers in any country.

The Chairman commended the Ambassador for his assistance especially in evacuating 69 Nigerians and the safe release of the Nigerian lady who was advertised for sale on social media.

Corroborating the Ambassador’s disclosure about the lady who was put up for sale and safely rescued by the Nigerian mission in Lebanon, Dabiri Erewa confirmed that the rescued lady had secured another job in Lebanon and was not ready to return home for now.

The highlight of the meeting includes a resolution by both the Lebanese Ambassador and the Chairman, NiDCOM, to work for effective collaboration between the Lebanese Diaspora and the Nigerian Diaspora.