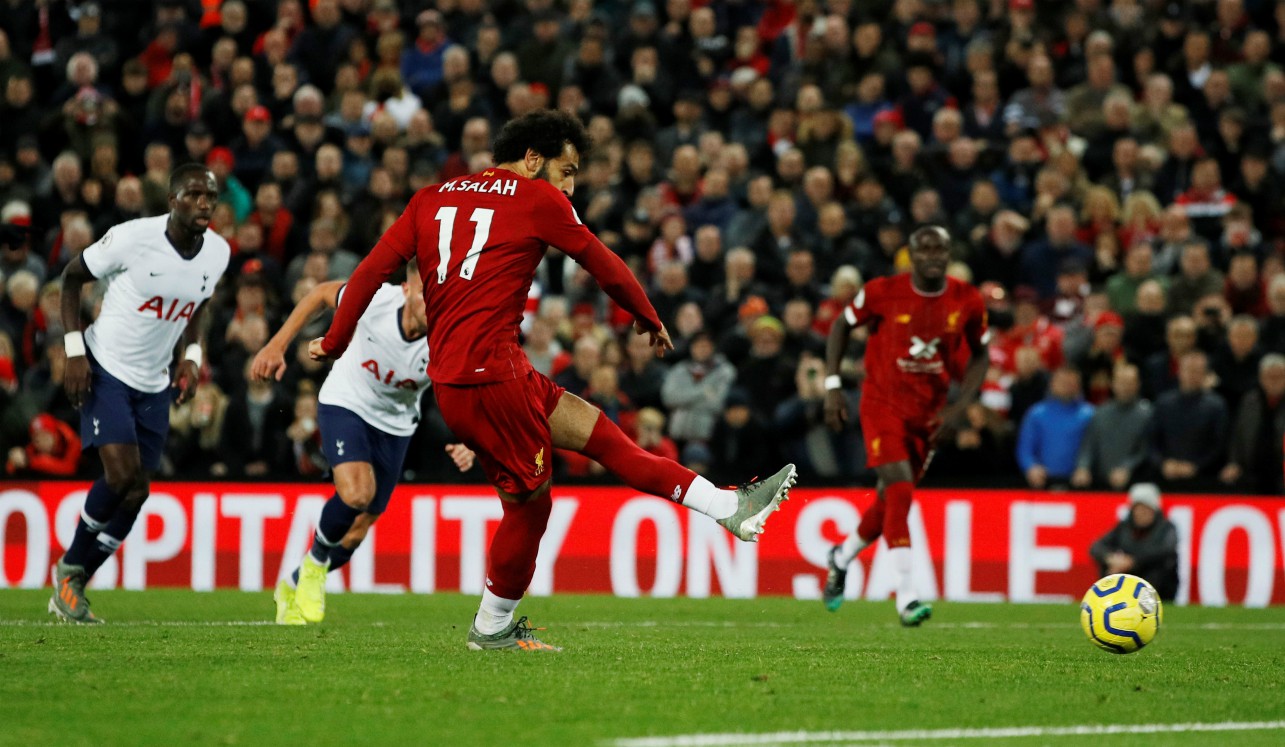 Liverpool came from behind to beat Tottenham 2-1 on Sunday and restore their six-point lead at the top of the Premier League as Manchester United finally remembered how to win on the road.

Elsewhere, Arsenal squandered a 2-0 lead at home to Crystal Palace to draw 2-2 in a match marred by an angry exchange between Granit Xhaka and the home fans while 10-man Newcastle held on to draw with Wolves.

Liverpool saw their commanding eight-point lead cut to six after their draw at Old Trafford last week and Manchester City cranked up the pressure on Saturday by beating Aston Villa 3-0.

Jurgen Klopp’s side were put under further pressure after Spurs made a stunning start at Anfield, snatching the lead inside the opening minute.

Son Heung-min burst forward and tried his luck from the edge of the area. His shot took a deflection and rebounded off the bar to Harry Kane, who calmly headed in, silencing the home crowd.

Liverpool piled on the pressure but goalkeeper Paulo Gazzaniga kept the marauding attackers at bay.

The home side finally claimed an equaliser in the 52nd minute when Jordan Henderson finished coolly, shooting across goal from close range.

And Liverpool took the lead in the 75th minute after referee Anthony Taylor awarded a penalty for a foul by Serge Aurier on Sadio Mane.

Mohamed Salah fired into the bottom corner from the spot — the 50th Anfield goal of his Liverpool career — to complete the turnaround and leave Spurs languishing in 11th place in the Premier League table.

Liverpool manager Jurgen Klopp praised his side for not panicking after going behind so early in the game.

“Their goalkeeper made some incredible saves but we stayed calm,” he told Sky Sports. “At half-time we said this game only had one problem, the score. There were one or two things we could do better and adapt a little bit.”

“But we were in control, we pushed them back and dominated apart from the last five minutes when we felt the intensity of the game,” he added. “It was a super game and I loved it.”

Ole Gunnar Solskjaer’s Manchester United swept Norwich aside 3-1 at Carrow Road to record their first away win in the Premier League since February despite failing to convert two penalties.

Scott McTominay gave United the lead midway thought the first half and Marcus Rashford made it 2-0 on the half-hour after failing to score from the penalty spot.

Anthony Martial also saw a spot kick saved by Tim Krul on the stroke of half-time but he also atoned, making it 3-0 in the 73rd minute before Norwich grabbed a late consolation goal.

“We needed a performance today,” said McTominay. “We should have beaten Liverpool last week. We’ve put in a 90-minute performance. When we’re on it, we’re on it. Hopefully we can get some winning momentum.”

The win lifts United to seventh in the table.

Arsenal struck twice in the first 10 minutes to take a 2-0 lead, with centre-backs Sokratis Papastathopoulos and David Luiz finding the net.

But Luka Milivojevic started the Arsenal collapse when he converted a penalty awarded by VAR after Wilfried Zaha was initially booked for diving.

Emery’s team faded in familiar fashion after that and Jordan Ayew bagged Palace’s deserved equaliser before Arsenal had a late Sokratis winner disallowed by VAR.

Xhaka’s remarkable bust-up with the crowd laid bare the simmering tensions at the club.

When Xhaka was replaced by Bukayo Saka, the disliked Switzerland midfielder trudged slowly to the touchline while petulantly gesticulating to the fans who had cheered his substitution and were now angrily urging him to get off the pitch quicker.

“He’s wrong but we are going to speak inside about that situation,” said Emery. “I want to be calm but, really, he was wrong in this action.”

Wolves battled back from a below-par first-half display to draw 1-1 against 10-man Newcastle thanks to Jonny’s leveller at St James’ Park, which cancelled out a first-half goal from Jamaal Lascelles.

Newcastle’s Sean Longstaff was shown a straight red card with eight minutes to go after flying into Ruben Neves.