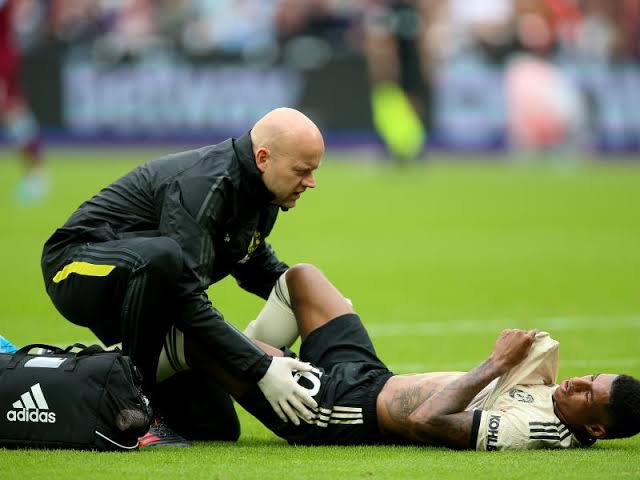 Manchester United manager Ole Gunnar Solskjaer has said he can’t guarantee that injured striker Marcus Rashford will play again this season.
United suffered a major blow when Rashford was ruled out of action for at least six weeks due to a double stress fracture in his back.
Rashford has scored 19 times in all competitions this term and his absence will be a major blow to a Red Devils side looking to avoid missing out on Champions League football for a second straight season.

Though Solskjaer initially gave a timeframe that could see Rashford back by March, the Norwegian admitted that the striker’s injury could keep him out for far longer.
When asked if Rashford could miss the rest of the season, Solskjaer would not rule out the possibility.
“Marcus is going to get as long as he needs to get fit. We are not going to risk him when he’s had an injury,” Solskjaer said in response to the question.
“I have got the best medical staff in the country and I am sure when Marcus comes back he will be 100 per cent fit.”
Solskjaer and his staff have come in for heavy criticism after Rashford was brought on as a substitute against Wolves in the FA Cup last week despite feeling discomfort in his back.
Rashford only lasted 16 minutes before reaggravating his injury, but Solskjaer fought back against talk that he was thinking about his own job status ahead of his player’s well-being.
“I never put myself before the team,” Solskjaer said. “I always put the team and the club before anything else. What we’ve discussed before here with Marcus, he’s had minor discomfort in his back since the Burnley game (on December 28).
“That’s maybe two weeks before this game. We’ve had scans, we’ve monitored him. There’s not been any injury there. He’s had complaints, yeah.

“I had a discussion and conversation with him the day before or two days before. ‘FA Cup, I’m going to rest you’.
“He felt fine. He was very, very adamant that if needed he could at least do half an hour because we want to go through in the Cup because it’s a big tournament for us. That just shows you Marcus’ attitude.”
With Rashford sidelined, United will face Burnley on Wednesday knowing that a win will take them to within three points of fourth-place Chelsea.