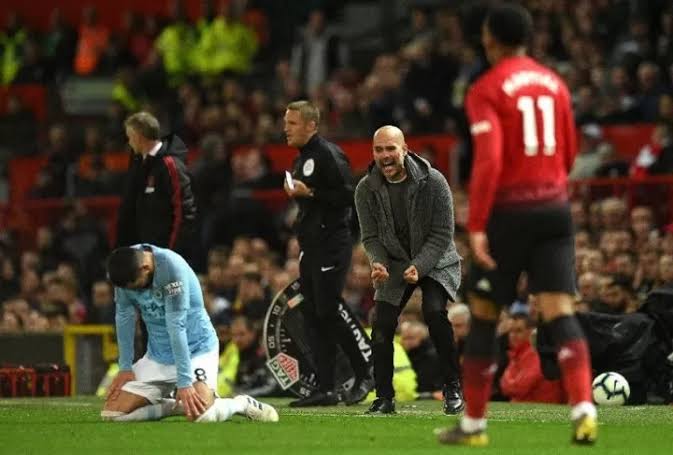 Manchester City manager Pep Guardiola believes Manchester United are one of the best teams in Europe when they’re allowed to run.
The Red Devils boast a pacey attack this season that features the likes of Marcus Rashford, Daniel James and Anthony Martial.
All three players are capable of blistering speed and Guardiola is wary of the threat they can pose as his side travel to Old Trafford on Tuesday for the first leg of their Carabao Cup semi-final.

“Of course in Old Trafford it will be quite different to here but it is a team that is built to run,” Guardiola said.
“When they can run it is one of the best teams not just in England, I would say, because of the pace they have, James or [Mason] Greenwood right now and Martial, Rashford and [Jesse] Lingard.
“I saw the line-up they make before the game against Wolves and they make a lot of changes so I guess they will be focused but they are two games, we have to go there to try and take a good result to the second leg here with our people, our fans to reach three years in a row the final of the competition.
“I have the feeling they are going to run, one or two or three or as many times as possible and we have to reduce the mistakes in the build-up, be prepared for that.
“But we have to do our game so I am not going to prepare our game just thinking don’t let them run so we have to go there, try to score a goal, we play our game and try to get a good result from there.
“I would like to play in Old Trafford most of the park except the first minutes we concede three or four times they could run, the rest of the game I like a lot the game we played the chances we create in many situations so I would like to play quite similar but we don’t have much too time but we have two days and a half to train and prepare the game we want to do after we have a bit of a break, five days to the next games.”
United claimed a 2-1 win over City when the two faced off in the Premier League last month with Martial and Rashford both scoring for Ole Gunnar Solskjaer’s side.
5 things – Lallana breaks assist duck
Former Red Devil Paul Scholes also recently praised the club’s attacking options, claiming they can match it with the best in Europe.
“The front three are as good as any team in the league or any team in Europe when you look at them, when they fancy it,” Scholes said on BT Sport.
“When Martial’s running at you, when Rashford’s running at you, James has been brilliant, they’re bringing Mason Greenwood into it too.”