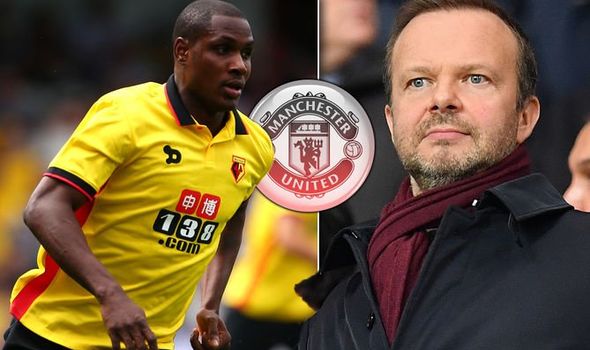 The former Watford striker is on his way back to the Premier League, with the Red Devils snapping him up on a six-month contract

Manchester United have signed attacker Odion Ighalo on loan from Shanghai Shenhua until the end of the season.

The Red Devils began hunting for an extra striker after seeing top scorer Marcus Rashford sidelined for three months with a serious back injury earlier this month.

The likes of Raul Jimenez, Edinson Cavani and Danny Ings have all been linked with moves to Old Trafford in recent weeks, but some surprise names also began to crop up as the winter transfer deadline edged ever closer.

After successful negotiations on deadline day, Ighalo will arrive at Old Trafford on a short-term deal in the coming days with Solskjaer excited to add to his attack.

“Odion is an experienced player. He will come in and give us an option of a different type of centre-forward for the short spell he’s staying with us,” he said.

“A great lad and very professional, he will make the most of his time here.”

Ighalo, a childhood fan of the Red Devils, played for Watford between 2014 and 2017, scoring 20 goals in 30 Championship appearances to help the team gain promotion during his first full season at the club.

He transferred that form into the Premier League the following campaign, contributing 15 goals to the Hornets’ cause as they successfully avoided the drop.

Ighalo was far less prolific in his final season at Vicarage Road however and ended up leaving the club to join Changchun Yatai in January 2017.

The Nigeria international scored 36 goals in 55 outings for the Chinese Super League club, before securing a move to Shanghai Shenhua last year.

Ighalo continued to find the back of the net regularly at club level in 2019, while also making his mark on the international stage.

He scored five goals during Nigeria’s run to the semi-finals of the African Cup of Nations, including the winning strike in their third-place playoff victory over Tunisia.

United will hope that Ighalo can produce the same kind of form over the next few months, as they fight for a place in the top four and in turn secure a return to the Champions League.

Solskjaer’s newest signing is set to fly to Manchester from China in the coming days meaning he won’t feature against Wolves at Old Trafford on Sunday, where  fellow January signing Bruno Fernandes could make his debut.